The Palestinian Tale of the Green Line 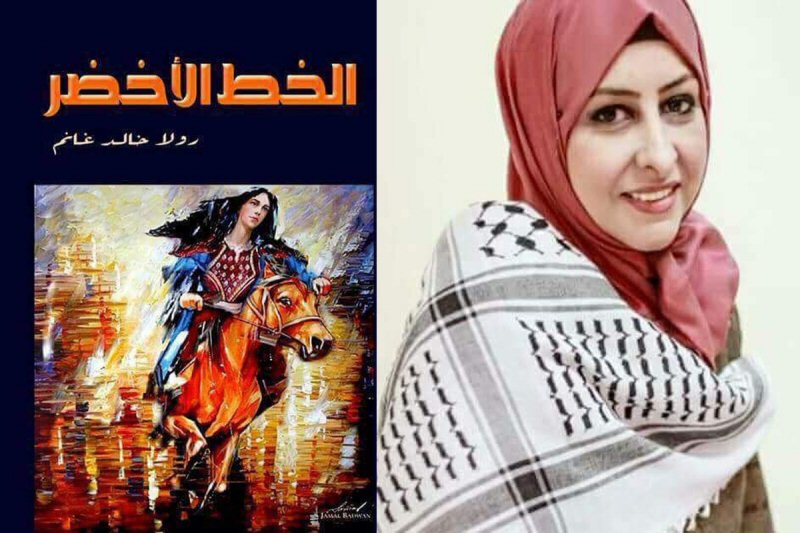 Dr. Rola Ghanem is a Palestinian novelist from the West Bank city of Tulkarem, she tells the story of her father through this novel which resembles the Palestinian resistance against the Israeli occupation and reveals the struggle of generations.  In the novel, she highlighted the importance of education and spoke about the suffering of the Palestinian woman under occupation.

When Dr. Ghanem make remarks about the creativity in her works and many other Palestinian artists, she says that in spite of the tragic circumstances that the Palestinians have experienced on the hands of the Israeli occupation, creativity is always born from the womb of suffering.

In the Green Line, she writes about a 13-year-old Palestinian boy named Abdullah from Baka Al-Gharbiya in the Palestinian Triangle –a collection of Arab villages in Israel— abducted from his home town after the Nakba in 1948 and was forced to join the Jordanian army.  He eventually settles in Tulkarem, in the West Bank and starts a family.  He is a remarkable figure who was conscious and strong enough to survive.  He is not able to return home because it is behind the Green Line, or occupied Palestine or Israel, and this is the constant division of the Palestinian people where they are so close yet still so far away from their home.

Dr. Ghanem also writes about Abdullah’s wife, Sahar, who dies at a young age leaving behind 2-year-old daughter, Solaf.  Sahar is the embodiment of Rola’s mother and Rola is herself the 2-year-old girl in the novel.  Abdullah manages to raise Solaf giving her the tenderness and love she misses from the loss of her mother and plants patriotism and steadfastness of Palestinians inside her.

Abdullah’s sister, Maram, was raised in Baka Al-Gharbiya.  In the novel she is the symbol of the struggling Palestinian woman.  In the face of occupation, as well her parents’ will to force her to marry their choice of a husband. She resisted and went on to complete her secondary education and joined the Hebrew University in Jerusalem.  Maram’s character is the new generation of the educated woman, who rebelled against the inherited values and customs.

The novelist looks back across the Green Line and evokes stories of families stranded and scattered on either side. This story tells us that people are still able to live in exile and diaspora. These Palestinians are present absentees who cannot announce their joy to their family who are so close, yet so far away.  This feeling is an ongoing Nakba, which Palestinians have endured for 70 years.  Many dream of returning one day to their historical home to be united with their families, but this is not an option for the Palestinians.  The novelist wants us to feel that this green line painted in our land was also painted in our hearts, and what is left behind is strange to us.  From this tragedy, we have old tales, dreams and memories.

As I read this interesting novel, I can easily relate to my childhood.  I wondered how I would cope with losing my home, land and loved ones. Despite the actions that threaten their safety, demolish schools and hospitals, Palestinians resist by living as normal life as possible.  They are committed to raising a new generation devoted to protecting their human rights.  Likewise, living within the Green Line puts Palestinians in a struggle for preserving their identity and human rights, integrating into a new society, and facing many forms of discrimination.

Wasan abu-Baker is an American activist with a Palestinian origin. She is vice chair of Corpus Christi National Justice for our Neighbors in Corpus Christi, Texas, a member of ABCD New addition Team, and a staff writer for Kings River Life Magazine in the US. She holds MA in special education from St John Fisher College in Rochester, New York.