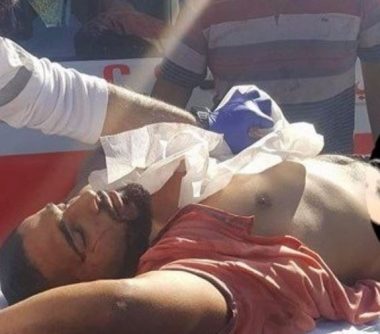 The Israeli prosecutor’s office has dropped all charges against an Israeli colonizer who, on November 30, 2017, shot and killed a Palestinian farmer, after a group of colonizers attacked Palestinians who were working in their orchard.

Israeli sources said the prosecution ruled that the colonizers who opened fire on the Palestinians, including the one who killed Mahmoud Ahmad Odeh, 46, “acted in self-defense,” and alleged that the colonial Israeli settlers “were picnicking in the area when Mahmoud and several other Palestinians hurled stones at them, mildly wounding one.”

The prosecutor’s office therefore dropped the “negligent homicide” charges against the Israeli perpetrator who killed Odeh.

Palestinian eyewitnesses of the fatal Israeli attack contradicted the Israeli allegation and confirmed that the Israeli colonizers assaulted many Palestinian farmers in their olive orchards in Qusra village, south of the northern West Bank city of Nablus, and opened fire at them, killing Odeh after shooting him with a live round in the chest.

The incident took place when approximately 20 settlers who came from the illegal “Yesh Kod” outpost, which was built on private Palestinian lands, assaulted the Palestinian and his family, before one of them shot Mahmoud.

The colony where the Israeli assailants reside is nearly 15 kilometers away from the Odeh’s land.

Following the shooting, Emad Jamil, a member of Qusra Village Council, said that “It is clear they infiltrated the area, close to many Palestinian homes, with one goal in mind, to commit murder – there have been many attacks by colonists in this area, including the burning, cutting and uprooting of trees.”

Eyewitnesses said the colonizers attacked many farmers in the area, and assaulted Odeh while in his orchard in Ras al-Nakhel area, east of the village, before shooting him with a live round in the chest.

Hours after the fatal Israeli attack, dozens of settlers and soldiers invaded Qusra, before the army shot and seriously wounded one Palestinian in his pelvis, and injured many others, while the settlers also smashed the front windshield and one of the windows of a Palestinian ambulance, wounding the driver in his eye.

Scores of Palestinians who suffered the effects of teargas inhalation.