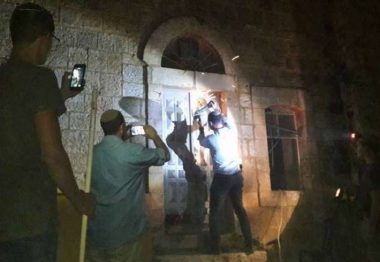 A group of around fifteen Israeli colonialist families invaded, on Monday at night, two Palestinian buildings close to the Ibrahimi Mosque, in the southern West Bank city of Hebron, despite being evicted earlier following a court ruling.

The colonizers invaded the two buildings, after claiming they purchased them with the approval of the ‘Civil Defense Administration,” which is the executive branch of the Israeli military occupation of the West Bank.

One of the homes is owned by Za’tari family members who said that the colonizers stormed their building, terrorizing the children, and kicked them out, before raising the Israeli flag on top of the building.

Israeli soldiers were heavily deployed in the area but did not intervene or try to remove the illegal colonizers.

It is worth mentioning that the colonizers invaded the two buildings, two years ago, and created colonialist outposts, they dubbed ‘Beit Rachel” and Beit Leah,” but were evicted by the army after a court ruling, despite their allegations of “purchasing the properties.”