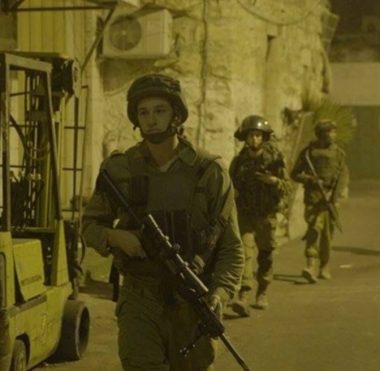 Israeli soldiers invaded, on Tuesday at dawn, many Palestinian areas in several parts of the occupied West Bank, stormed and violently searched homes and abducted at least twenty Palestinians.

In a statement, the Israeli army said its soldiers “arrested twenty wanted Palestinians,” in the West Bank.

In Bethlehem, the soldiers abducted a child, identified as Nour Najjar, from his home in the Deheishe refugee camp, south of the city, and summoned a former political prisoner, Waleed al-Ja’fari, for interrogation.

The invasion was carried out by dozens of soldiers who fired gas bombs and concussion grenades at local protesters, causing many to suffer the effects of teargas inhalation.

It is worth mentioning that Waleed is the brother of Jihad al-Ja’fari, 19, who was killed by the army on February 24th 2015, after the soldiers invaded the refugee camp.