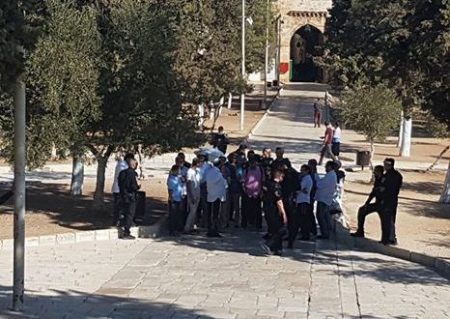 Mosque sources said, according to the PNN, that extremists settlers provocatively carried out Talmudic rituals and prayers in the mosque, and that an extremist settler threw himself on the ground near Al-Rahma Gate, as most of the settlers were barefoot. They usually perform such rituals specifically in this area.

Extremist Israeli settlers and politicians regularly violate the sanctity of Al Aqsa Mosque — on an almost daily basis — and always under the protection of armed occupation forces who often attack Palestinian worshipers who try to protect their holy site.