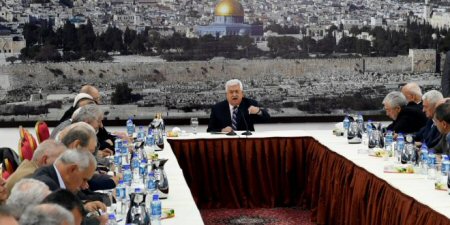 PA President Mahmoud Abbas attacked U.S. Ambassador to Israel David Friedman on Monday, calling him a “son of a dog ” for saying that Jewish settlements in the West Bank are a part of Israel.

“Son of a dog. They [the settlers] are building on their land? You are a settler and your family are settlers,” Abbas said of Friedman in a speech in Ramallah.

He lashed out at the US ambassador to Israel, David Friedman, saying he is a settler who supports settlements when he said that Israel was building in its territory and not in occupied areas.

“He’s a settler, so what can we expect from him,” said Abbas describing Friedman.

Abbas also said Hamas and US President Donald Trump are cooperating in destroying the Palestinian national project of independence because they want a state in Gaza.

He said the US supports the separation between the West Bank and Gaza because it does not want a Palestinian state. He said Trump’s recognition of Jerusalem as Israel’s capital and cut aid to the United Nations Relief and Works Agency for Palestine Refugees, UNRWA, aim at destroying Palestinian aspirations for independence and statehood.

Abbas also accused Hamas, at the start of the leadership meeting in Ramallah, on Monday, of being responsible for the assassination attempt against Prime Minister Rami Hamdallah and chief of intelligence Majid Faraj in Gaza last week, saying that he decided to take national, legal and financial measures to punish Hamas for its act.

He said he does not want to punish the Palestinian people, but he has to take action against Hamas, which rules Gaza and refuses to allow the Palestinian government to rule there.

“I have decided to take national, legal and financial measures to protect out national project,” said the president. “We never thought of punishing any Palestinian citizen, not in the West Bank or Gaza. But we have to say where the wrong is and where the crime is. This situation is not acceptable.”

He accused Hamas of sabotaging all efforts for reconciliation, saying that either the Palestinian government takes full charge of everything in Gaza, or the de facto authority remains fully responsible for it.

“We did all we can to make the reconciliation a success, but, unfortunately, the result for empowering the government was zero. We have been working hard for six months and got nothing, not the government, not the crossings, not security, nothing,” he said. “It’s all hypocrisy. They don’t want reconciliation,” he added.

“There aren’t two sides to the division, rather only one side that is consolidating it and enforces an illegal de facto situation,” said Abbas, adding that the outcome of the reconciliation talks is the attempt to assassinate Hamdallah and Faraj.

He said he will not wait for Hamas’ investigation into the assassination attempt “because we know that they, Hamas, are behind it,” adding that assassinations are not new to Hamas, whose history is full of similar acts, warning that the attempt will not go without reaction.

Abbas said Hamas and US President Donald Trump are cooperating in destroying the Palestinian national project of independence because they want a state in Gaza.

He said the leadership meeting was going to discuss all these issues and decide on the next moves.

For his part, and in response to President Abbas words, Friedman suggested that Abbas’ remarks amounted to anti-Semitism while speaking at a Jerusalem conference, later on Monday.

“Three young Israelis “settlers” were murdered over the weekend in cold blood by Palestinian terrorist and a reaction from the Palestinian Authority was deafening. No condemnation,” Friedman told the audience at the Global Forum for Combating Antisemitism in Jerusalem. “I saw his response on my iPhone. His response was to refer to me as son of a dog. Is that anti-Semitism or political discourse? I leave that up to you.”

“For the first time in dozens of years the American administration has stopped pampering the Palestinian leaders Apparently the shock from the truth made them lose their heads.”