Abbas: PA Will Not Take Part in Any Conference Not Based on UN Resolutions 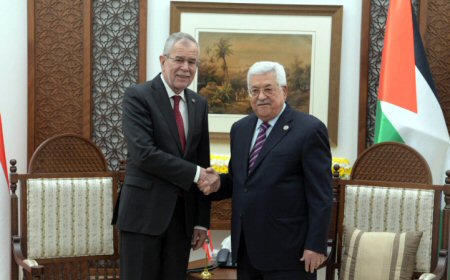 PA President Mahmoud Abbas said, on Tuesday, that he will not take part in any peace conference on the Palestinian-Israeli conflict that will not be based on international United Nations resolutions.

Speaking at a press conference at the presidential headquarters in Ramallah with this guest, Austrian President Alexander Van der Bellen, who arrived in Palestine on an official state visit, President Abbas stressed that “we will not participate in any international conference not based on United Nations resolutions.”

He also said that no one is allowed to speak or negotiate on behalf of the Palestinians. “We are the first and last party responsible for the Palestinian cause. No one takes our place or speaks on our behalf,” he said.

“I have had fruitful discussions with President Alexander Van der Bellen and had put him in the latest political developments in light of the political impasse because of the intransigence of the Israeli government and its refusal to recognize the Palestinian state while it continues with its occupation of the Palestinian territories,” said President Abbas, in his opening remarks.

The President stressed, according to WAFA, that the United States, after taking the Israeli side on all matters, “is no longer qualified to act as the sole mediator due to its bias toward Israel and its decisions against international law on Jerusalem, refugees and others.”

He called for convening an international peace conference to create and a multilateral mechanism to move forward on the road to peace. “This is where the European Union and its member States can play an important role alongside the (UN) Security Council.”

The President said the visit of his Austrian counterpart will strengthen relations and cooperation between their two countries, which he stressed is historical, thanking Austria for its political and economic support to enable Palestine to build its national institutions and improve its economy.

He said that work is underway to forming a new Palestinian government to prepare for legislative elections. “We hope that everyone will cooperate to hold them in the West Bank, Jerusalem and the Gaza Strip,” he said, adding that “democracy is our way to restore stability and unity of our land and people, alleviate the suffering of our people in the Gaza Strip and support for our people in Jerusalem.”

He expressed hope that the European Union and its member states will recognize the State of Palestine, “because that would greatly help advance the peace process.”

For his part, Austrian President Van der Bellen said that his county, as the European  Union, supports the two-state solution through negotiations.

He said that his country does not accept what the US administration has done on Jerusalem by transferring its embassy from Tel Aviv to Jerusalem and withholding funds from the United Nations Relief and Works Agency for Palestine Refugees (UNRWA), stressing that the EU will continue to provide aid to UNRWA.

“We talked during our meeting about peace in the Middle East, and we know the situation is bad,” he said, explaining that there are many programs that the Austrian Development Agency has been providing for the Palestinians for decades in humanitarian, health and water projects, and there are many programs Austria is supporting through the European Union, such as aid for UNRWA.

He thanked President Abbas for inviting him to come to Ramallah, stressing that relations between Austria and Palestine are warm and “we will work to support the Palestinian people.”

Upon completion of his visit, the Austrian President laid a wreath at the grave of the late Palestinian leader Yasser Arafat, whom he said he knew for a long time.