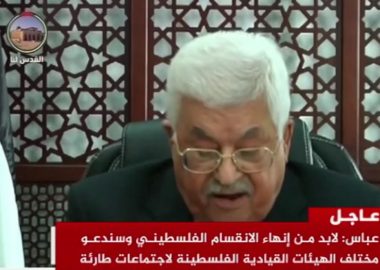 Palestinian President Mahmoud Abbas stated that the decision of U.S. President Donald Trump regarding recognizing occupied Jerusalem as Israel’s capital, and moving the U.S. Embassy to the occupied city, is a sharp blow to all efforts aiming at achieving a lasting and comprehensive peace.

Abbas stated that this announcement also means America has officially quit it role as a “mediator” in peace talks between Israel and the Palestinians, adding that this dangerous decision will only serve the interest of fanatic groups, which aim at transforming the current conflict into a religious war.

The Palestinian President said that this announcement would never grant Israel legitimacy over occupied Jerusalem, and should also provide strong incentive to the Palestinian faction to unite.

“The coming days will witness calls for urgent meetings to discuss these serious and dangerous developments,” he added, “We will remain a united force defending occupied Jerusalem, peace, liberation and freedom, and we will continue our struggle for ending this illegal occupation, and achieving independence.”

He also stated that the United States, and its President Donald Trump have chosen to violate all international agreements, and International law, and decided to ignore international standards regarding the future of Jerusalem.

“By recognizing Jerusalem as Israel’s capital, Trump and his administration are rewarding Israel for its violations of International agreements and United Nations resolutions,” Abbas added, “Trump is encouraging Israel to continue its occupation, its colonialist and apartheid policies, and its ethnic cleansing of the Palestinian people in their homeland.”

“These policies will also serve the interests of fanatic groups that aim at transforming the conflict into a religious war, which will drag the entire region, into endless wars.” The president said, “We have frequently warned against such moves, and against the dangers of fostering extremist elements that would only bring further escalation and destruction.”

The Palestinian President also stated that he has been in contact with various countries around the world, over the past several days, especially Arab and Islamic counties, regarding Trump’s policies, which violate International Law, the Arab Peace Initiative, and Security Council Resolution #194, affirming that “the only way to peace is by establishing an independent Palestinian State, with East Jerusalem as its capital, living in peace next to Israel.”

“We will also call for urgent meetings with all factions, and we will convene the Central Council of the Palestine Liberation Organization, to formulate a united stance, discuss all available measures, and to affirm our legitimate demands and aspiration of full liberation and independence, the president, concluded, “We will coordinate all our efforts with the Arab and Islamic countries, and with various countries around the world. We will be a united front defending Jerusalem, defending peace and liberty, and we will achieve or national independence.”