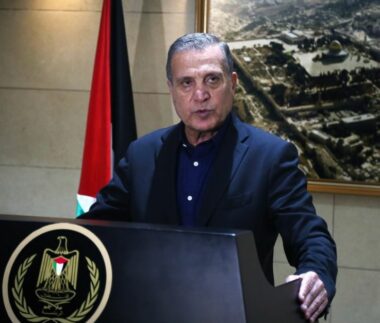 The Spokesperson of the Palestinian Presidency, Nabil Abu Rodeina, denounced the latest Israeli plan to build more than 2500 colonialist units in the occupied West Bank, and described them as another attempt to destroy any prospect of peace.

“These violations require a serious international stance that should deviate from mere ‘condemnation’ into real pressure on the illegal Israeli occupation of Palestine,” Abu Rodeina stated, “The International Community must act and put an end to the constant violations of International Law, in addition to all related United Nations and Security Council resolutions.”

He added that the international resolutions explicitly defined colonies as illegal and must be removed from the occupied Palestinian territories.

“The Israeli government is racing against time to eliminate any possibility of real peace based on the two-state solution,” Abu Rodeina said, “It is also trying to obstruct any effort by the upcoming U.S. Administration of president-elect Joe Biden to resume the political process which has been stalled for many years.”

The official also said that Israeli Prime Minister, Benjamin Netanyahu, is escalating the theft of Palestinian lands, which was boosted and supported by the outgoing U.S. President Donald Trump, and his policies that violate International Law.

“However, our people will not allow the continued theft of their lands and will struggle for achieving all their internationally guaranteed rights, Abu Rodeina said, “The Palestinian people will now allow Netanyahu or any other leader to use their just cause as a bargaining chip.”

He called on the upcoming Biden administration to take a clear stance regarding the Israeli violations if it is really seeking peace and stability in the region and added that Security Council resolution #2334, adopted in December of 2016, was also adopted by the United States.

The resolution reaffirmed that “Israel, the occupying power, must abide scrupulously by its legal obligations and responsibilities under the Fourth Geneva Convention relative to the Protection of Civilian Persons in Time of War, of 12 August 1949, and recalling the advisory opinion rendered on 9 July 2004 by the International Court of Justice.”