Activists Hold Weekly Protest In Bil’in, March In Solidarity With The Detainees 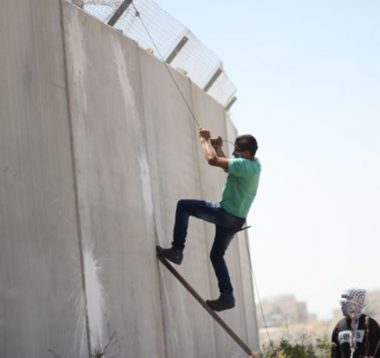 Dozens of Palestinians, accompanied by Israeli and international peace activists, marched Friday in Bil’in village, near Ramallah in the occupied West Bank, holding the weekly nonviolent procession against the illegal Israeli Annexation Wall and colonies, and in solidarity with the ongoing hunger strike of the Palestinian detainees.

The protesters marched from the center of the village, heading towards Abu Limon area, close to the Annexation Wall, separating the villagers from their lands and orchards.

They carried Palestinian flags, and pictures of imprisoned Palestinian detainees and leaders, including legislators Marwan Barghouthi and Ahmad Saadat, while chanting for ongoing steadfastness, resistance, the liberation of Palestine and the release of all detainees.

Some protesters managed to climb the Annexation Wall and raised Palestinian flags, while others burnt tired close to its iron gate.

The Popular Committee against the Wall and Colonies in Bil’in called for ongoing protests, and solidarity activities with the detainees, across the occupied territories, and around the world,

In related news, the soldiers shot and injured at least fifteen Palestinians in different communities in Ramallah governorate, after the army assaulted processions in solidarity with the hunger striking Palestinian detainees in Israeli prisons.

It is worth mentioning that a general strike was declared across the occupied West Bank and the besieged Gaza Strip, in solidarity with the detainees, amidst ongoing protests.