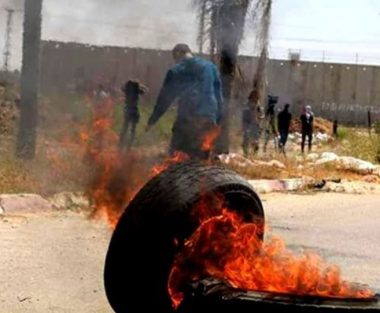 Israeli soldiers shot and injured, Friday, at least fifteen Palestinians in different communities in the central West Bank district of Ramallah, after the army assaulted processions in solidarity with the hunger striking Palestinian detainees in Israeli prisons.

In Nabi Saleh village, north of Ramallah, the soldiers fired many live rounds, including the Toto hollow-point bullets, wounding five Palestinians, while two others were shot with rubber-coated steel bullets, and dozens suffered the effects of teargas inhalation.

Local youngsters hurled stones and empty bottles on the soldiers, who invaded the town, and assaulted the procession.

In Silwad town, east of Ramallah, the soldiers shot one Palestinian with a live round in the leg, and caused scores to suffer the effects of teargas inhalation.

Furthermore, several Palestinians hurled stones at army vehicles and colonists’ cars, driving on a bypass road, near Sinjel village, north of Ramallah, causing damage, while the soldiers closed many roads and installed roadblocks.

Three Palestinians were also shot by live army fire, during clashes that took place, after the soldiers assaulted a precession near Ofer prison, while dozens suffered the effects of teargas inhaling, and four others were shot near Qalandia terminal, north of Jerusalem.