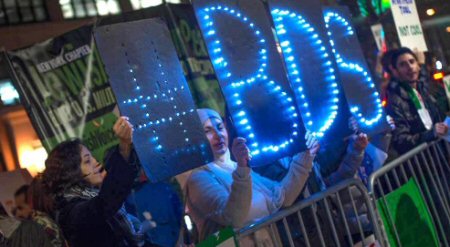 Israel released on Sunday, 7 January 2018 a list of NGOs whose members will be prevented from entering the country.

Israel’s Strategic Affairs Minister Gilad Erdan announced the list of 22 NGOs from Europe, the United States, South America, and Africa whose employees and/or members are banned from entering Israel due to their alleged support of the boycott, divestment, and sanctions (BDS) campaign. With this move, the Israeli government aims to further stifle the global movement against the occupation.

Hassan Jabareen, general director of Adalah – The Legal Center for Arab Minority Rights in Israel, issued the following statement in response to the list’s release:

“Adalah firmly condemns the Israeli government’s ban, which arbitrarily places draconian limits on foreign visitors. It also restricts the ability of Israeli citizens and Palestinian residents of the Occupied Palestinian Territory to exercise their rights of association for the purposes of family unification, for employment, and for cultural and political exchange. This ban is an overt violation of the constitutional rights of Israeli citizens and the rights guaranteed to Palestinian residents of the OPT under international humanitarian and human rights law. This move is reminiscent of South Africa’s apartheid regime which also prepared blacklists in order to punish people and prevent the entry of those opposed to its racist policies.”

The Entry to Israel Law (Amendment No. 27) (Denying a Visa and Residency Permit for Advocates of Boycotting Israel), prevents foreign nationals or non-residents who have publicly expressed support for the BDS campaign from entering Israel.

The list of organizations now banned by Israel includes: