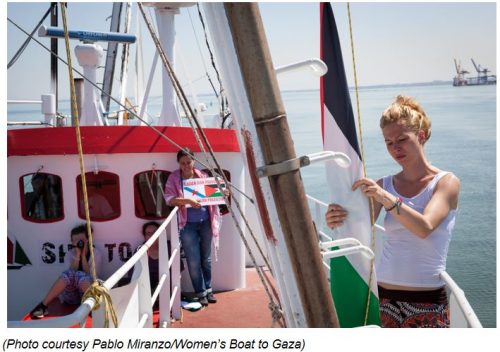 Adalah – The Legal Center for Minority Rights in Israel provided legal representation for four of the 13 women detained by the Israeli military when it commandeered their Gaza-bound boat, dubbed “The Women’s Boat to Gaza”, who were slated for deportation from the country.

07/10/2016 Adalah: Detention of women was illegal as they were forced by military to enter Israeli territory, therefore not ‘illegally staying’ in country.

The Israeli navy took control of the Women’s Boat to Gaza, also known as the Zaytouna-Oliva, and its female crew on the night of 5 October 2016 as they attempted to breach the Israeli naval blockade of the Gaza Strip to call world attention to the grave humanitarian and human rights situation there.

The vessel was stopped in the Mediterranean Sea approximately 35 nautical miles off the coast of Gaza and Israeli military forces brought its crew and passengers to the Givon detention center in Ramle.

The four women represented by Adalah are:

All four women were issued with custody and expulsion orders and agreed to sign a “request” to be sent back to their countries of origin as soon as possible.

During their hearing yesterday, 6 October 2016, at the Detention Review Tribunal, Adalah Attorney Suhad Bishara argued that:

The four women were on a humanitarian journey, making their way to Gaza to identify with local residents;

Israel’s maritime blockade of Gaza is illegal and in violation of international law;

The detention of the women is illegal and the tribunal lacks jurisdiction because the women aren’t “illegally staying” in Israel according to the terms of the Entry into Israel Law, but rather were forced into Israeli territory by the Israeli military;

The Israeli navy commandeered the vessel when it was 35 miles off the Gaza coast. According to the 2009 order issued by the Israeli Defense Ministry, which Adalah also opposes, the military blockade of the coastal territory extends 20 miles out to sea.

The Detention Review Tribunal ruled that the four women would remain in custody until their deportation from Israel.

Despite the Tribunal’s apparent agreement that it lacked jurisdiction to hear the case, it nevertheless upheld the deportation orders:

“The claims raised by the detainees’ representatives have significant importance, but the veracity of most of these claims should be determined at a later date… I refer now to the claim that the detainees were brought into Israeli territory against their will and may therefore not be considered ‘illegally staying’ [in Israel]. It is possible that the claim made by the detainees’ representatives is indeed correct: someone brought against his will into Israeli territory – by state authorities themselves – would not be considered ‘illegally staying’ in the country. Nevertheless, Interior Ministry authorities have decided to issue a deportation order against the detainees,” the Detention Review Tribunal wrote in its decision.

As of the evening hours yesterday, all the women had been transferred to Israel’s Ben-Gurion Airport to await outbound flights to their countries of origin.

Representatives of a number of Tel Aviv-based foreign consulates were also in attendance at the hearing.

The Women’s Boat to Gaza is part of the wider Freedom Flotilla Coalition, intended to “raise awareness about the ongoing struggle that women in Gaza, in the West Bank, inside the Green Line and in the diaspora, have waged and continue to wage against the Occupation,” according to the organization’s website.