Army Abducts A Palestinian Near Nablus, Summon Two From Bethlehem 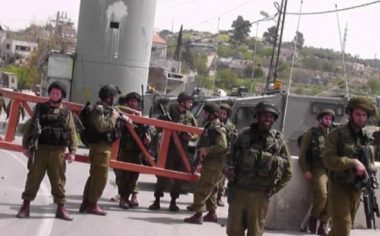 Israeli soldiers abducted, earlier on Friday at dawn, a young Palestinian man, after stopping him at the Za’tara military roadblock, south of the northern West Bank city of Nablus. The army also summoned two Palestinians from Bethlehem for interrogation.

Eyewitnesses said the soldiers abducted Mohammad Ibrahim Nabreessy, from the al-Far’a refugee camp, in Tubas, while he was on his way to Ramallah, and took him to an unknown destination.

The Bethlehem office of the Palestinian Prisoners’ Society (PPS) said the two Palestinians have been identified as Hamza Ibrahim Zreina, 28, and Tha’er Salam Jawareesh.