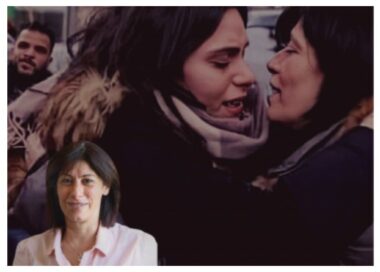 By: Addameer Prisoner Support and Human Rights Association
13-07-2021: On 12 July 2021, following several communications submitted to the Israeli Prison Service (IPS) for the temporary humanitarian release of Palestinian political prisoner Khalida Jarrar to attend her recently deceased daughter’s funeral, the Israeli Prison Service denied Khalida’s release on political grounds, citing the alleged “security threat” she poses due to her “[negative] leadership role” inside and out of prison.

The denial of Khalida Jarrar’s release to mourn the sudden death of her daughter and participate in burial rights stands in stark violation of protected recognition of human dignity and family rights under international law.

Khalida Jarrar’s daughter, Suha Jarrar, was unexpectedly found dead in her apartment in Ramallah on 11 July 2021. Suha, a 30-year-old human rights defender, served as a Research and Advocacy officer for Al-Haq, working with United Nations treaty bodies and the Human Rights Council, specializing in gender, environment, and climate change.

Addameer’s lawyers, representing Khalida, sent forth legal communications with the relevant local occupation authorities appealing for her temporary release. Nevertheless, the Israeli Prison Service responded to the communication, firmly denying the request and any possibility of further entreaty with an index of justifications that allegedly mark Khalida as a “security threat” ineligible for humanitarian considerations.

On 31 October 2019, Khalida Jarrar was detained once again by IOF and held in detention for months before her sentence on 1 March 2021 to 24 months in prison and a fine of 4,000 NIS. During the hearing session, the military prosecutor amended Khalida’s indictment, limiting it solely to her political role and work with the Palestinian Authority, thus establishing no charges against her in affiliation with any military, financial nor organizational activities.

[1]Despite the sentence relating to her political activities, the IPS characterized Khalida Jarrar as a “security inmate,” thus falling under a category prohibited from temporary humanitarian release under the Israeli Prison Ordinance No. 03.02.00. In establishing her as a “security inmate”—constituting a “security threat” to the region, the IPS explicitly notes Khalida’s leadership role as a Palestinian Legislative Council member and former director of Addameer Prisoner Support and Human Rights Association.

Her classification as a “security inmate” automatically sets her under more stringent rules and allows for greater violations and restrictions on her basic rights. Moreover, the IPS notes Khalida Jarrar’s “negative influence” inside and outside of prison, coupled with her previous arrests and administrative detention, further confirming the “security threat” she poses if temporarily released. In a base “humanitarian” gesture, the IPS allowed for one short phone call between Khalida Jarrar and her bereaved family.

In listing the purported grounds for the denial of the request for Khalida Jarrar’s humanitarian release to bury her daughter, the Israeli occupation regime explicitly relies on criminalizing Khalida’s political work and human rights activism as a means of establishing her “security threat,” thus depriving her of any inherent human dignity and humanitarian considerations.

Furthermore, Israeli occupation authorities cement their determinations by citing her previous arrests and administrative detention, her systematic harassment and targeting by the Israeli occupation regime, never minding the lack of evidentiary grounds for her administrative detention or her most recent sentencing solely addressing her political activities.

Throughout Khalida’s work as a Palestinian civil society leader, former General Director of Addameer, Palestinian Legislative Council (PLC) member, and role in the formulation of Palestine’s application to the ICC, she has been systematically harassed and targeted by the Israeli occupation regime.

These efforts come as part of an ongoing Israeli effort to suppress Palestinians’ exercise of political sovereignty and self-determination. Khalida has been detained by Israeli Occupation Forces (IOF) three times between 2015 and 2019 for an accumulated period of 59 months. Furthermore, Khalida was issued a travel ban in 1998, which was only lifted once in 2010 to receive medical treatment.

The denial of the humanitarian request by the Israeli occupation regime violates the essence of human dignity and family rights protected under the Universal Declaration of Human Rights (UDHR), the International Covenant on Civil and Political Rights (ICCPR), and the Fourth Geneva Conventions mandated upon Israel as the Occupying Power.

The act confirms the retaliatory and punitive nature of the occupation regime, which denies the most basic humanity to Palestinians and where political activities, affiliation, and leadership are prohibitively taken against their rights and dignity.

Addameer Prisoner Support and Human Rights Association mourns the sudden death of Suha Jarrar and the tragic reality of Israeli military occupation that denies a mother the chance to mourn her daughter and participate in her burial.

Notwithstanding, Addameer will continue to call for the immediate release of Khalid Jarrar and is committed to advocating for the actualization of the dignity and rights of Palestinian prisoners.