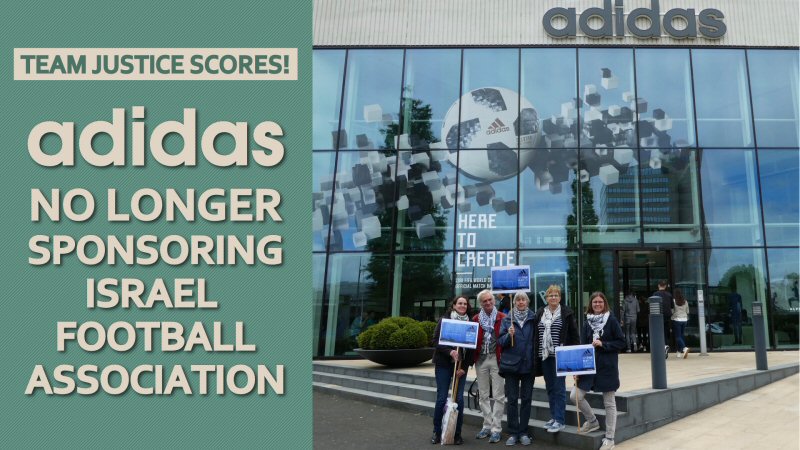 The Palestinian Campaign for the Academic and Cultural Boycott of Israel welcomes the news that Adidas is no longer sponsoring the Israel Football Association (IFA).

Last March, over 130 Palestinian football clubs called on the German sportswear manufacturer to end its sponsorship of the IFA over its complicity with the oppression of the Palestinian people. The IFA includes six Israeli football teams based in illegal Israeli settlements that rob Palestinians of land and resources. Israeli settlements are considered a war crime under international law.

A spirited global campaign followed, with human rights supporters around the world calling on Adidas to end its sponsorship of matches on stolen Palestinian land. In June, over 16,000 signatures on an international petition were delivered to Adidas satellite headquarters in Amsterdam.

In a reply to the Palestinian clubs, Adidas stated it had raised the issue of Israeli settlement teams with FIFA. Adidas, one of FIFA’s main partners, noted the need for the world governing body of football to “adjudicate on the question of the Israeli settlement teams, by following the tenets of international law and their human rights policy.”

Major international organizations such as Human Rights Watch, UN experts and 175 lawmakers have all urged FIFA to resolve the issue of Israeli settlement clubs.

Israel’s brand has become increasingly toxic following its wide scale massacres of Palestinians in Gaza peacefully protesting for their UN-sanctioned rights. Israel has killed nearly 150 Palestinians, including journalists, medics and over 20 children since the end of March.

More than 50 Palestinian athletes are among the over ten thousand injured by Israel’s shoot-to-kill-or-maim policy in Gaza, leaving many with live changing disabilities, cutting short promising sports careers.

A warning to Puma

Another German sportswear company, Puma, has replaced Adidas as sponsor of the IFA under a four-year deal.

By sponsoring the IFA, Puma is associating its global brand with Israel’s expanding settlement enterprise, whose illegal land grabs and home demolitions are driving out indigenous Palestinians through gradual ethnic cleansing. The iconic leaping cat is sports-washing Israel’s military occupation and violations of Palestinians rights.

Puma’s Code of Ethics maintains it has a commitment to human rights and pays “close attention to the concerns expressed by international institutions, non-governmental organisations (NGOs) and representatives of civil society.”

As a signatory of the UN Global Compact, Puma also has an obligation to make sure that it is “not complicit in human rights abuses.”

We call on Puma to end its sponsorship of the Israel Football Association (IFA) as long as it is involved in Israel’s grave violations of international law and oppression of Palestinians.

The cat should take a leap for Palestinian rights.