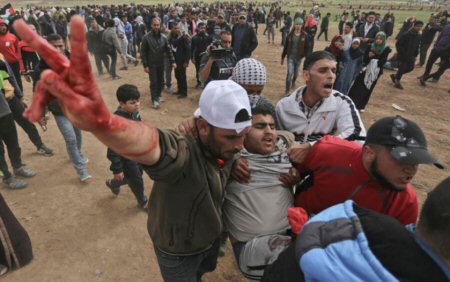 The African Group has called on the United Nations (UN) to hold Israel accountable for its crimes against Palestinians.

The African Group – sometimes known as the Group of African States – is a regional assembly within the UN comprised of 54 member states from the African continent. It represents 28 per cent of all UN members.

The group yesterday addressed the 41st session of the United Nations Human Rights Council (UNHRC) in Geneva, Switzerland, one item of which discussed the human rights situation in the occupied Palestinian territories (oPt).

The group’s representative, Andre da Conceicao Domingos of Angola, called for the international community to act to end Israel’s now 52-year-old occupation and the blockade it has imposed on the Gaza Strip since 2007, as well as to end Israel’s illegal settlement project, imprisonment of Palestinians and policy of collective punishment.

Some members of the African Group also submitted individual statements, with Nigeria’s representative Muhammad Isa stressing the need to avoid double standards in the implementation of international law and human rights. He also demanded accountability from Israel in this regard.

South Africa’s representative Nozipho Mxakato-Diseko also addressed the session, telling the council that “Israel’s occupation is virtually indistinguishable from annexation”. Mxakato-Diseko also condemned Israel’s theft of Palestinian water resources and pointed out that while Israel markets desalination and water technology to the world, it is responsible for water scarcity in the oPt.

African states have long been outspoken supporters of the Palestinian cause. This weekend the grandson of iconic South African leader Nelson Mandela, Nkosi Zwelivelile Mandela, attended London’s Palestine Expo – Europe’s biggest Palestine exhibition which shed light on the plight of Palestinian refugees and those living under Israel’s occupation.

Addressing the conference, Mandela said that “we have a moral duty to support BDS and to support the Palestinian struggle,” referring to the Boycott, Divestment and Sanctions movement.

Mandela congratulated the Palestine Expo for “creating a unique experience which proudly celebrates Palestinian art, history and culture whilst fostering discussion and activism in the UK”, but emphasised to audiences that the event “reminds us of the reality of a nation that has now withstood 71 years of the Nakba,” during which 750,000 Palestinians were forcibly displaced from their homes.

Mandela was also critical of an attempt by anti-Palestine group UK Lawyers for Israel (UKLFI) to cancel the Palestine Expo. Last week it emerged that UKLFI had made several attempts to cancel the exhibition, claiming its organisers are “major promoters” of BDS. The group also tried to convince the German owners of London Olympia – where the event took place – to cancel the exhibition in light of a non-binding motion recently passed in Germany claiming that BDS is “anti-Semitic”.

The South African MP slammed these moves, claiming they “reflect the desperation that Apartheid Israel and its lackeys are resorting to in silencing peaceful popular protest”. He stressed: “We say to them and all who seek to deny our basic human rights such as freedom of expression – hands off BDS, hands off Palestine Expo.”