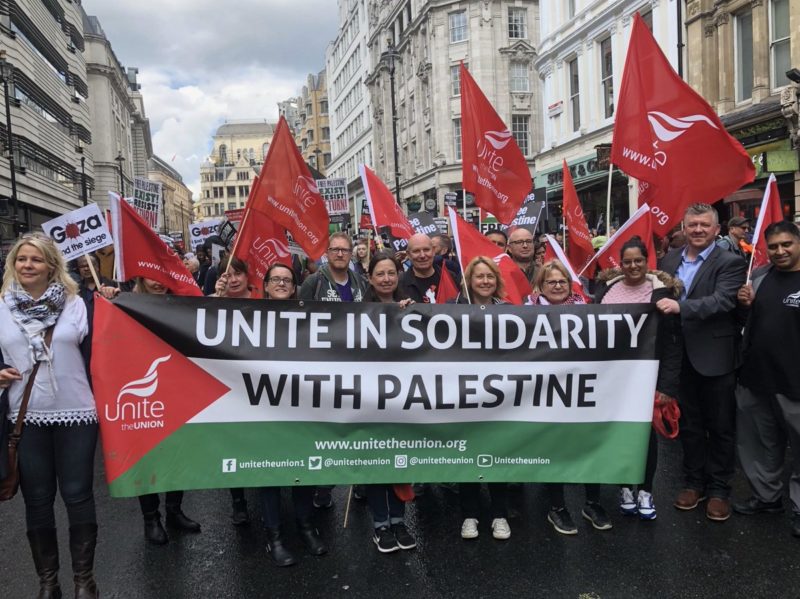 In a major victory for the Boycott HP campaign, the second largest British and Irish trade union, with 1.2 million members, Unite the Union, joined the campaign. Unite joins Federatie Nederlandse Vakbeweging (FNV), the Netherland’s largest trade union, with 1.1 million members, which dropped HP as a partner in their offers to their members in April. The Boycott HP campaign and the trade unions concerns’ focus on HP and HPE’s provision of equipment and technology for Israel’s army and police, and for the population database that Israel uses to enforce its system of racial segregation.

Unite, in its Executive Council meeting in June, passed a resolution to end buying of HP products and replace existing ones. Unite the Union noted this as a step in the direction of setting their standards for solidarity to global campaigns for justice and support for all workers.

Joseph Bleach, a member of Unite the Union, said:

Solidarity with the Palestinian freedom struggle is an essential part of building a just world. While Israel escalates its occupation, apartheid and colonisation against the Palestinian people, Hewlett Packard companies profiteer from this grave violation of international law and Palestinian human rights.

Until HP companies end all such involvement in serious human rights violations, we shall continue to exclude them. Our trade union will continue to stand in solidarity with workers and struggles for justice in Palestine and globally.

Palestinians, especially workers, are deeply grateful for this latest expression of Unite the Union’s solidarity with our struggle for justice and liberation.

HP companies have long enabled Israel’s apartheid and criminal policies, and they need to be held accountable for this. HPE provides the database for Israel’s population registry, the very instrument that enforces apartheid and racial segregation upon Palestinian citizens of Israel and ‘residents’ of occupied Palestinian East Jerusalem. It also maintains the database for illegal Israeli settlers in the occupied West Bank.

HP Inc provides computers to the Israeli army. HP-branded companies must immediately and unequivocally end these and any other existing complicities in serious violations of international law, and they must pay reparations to their Palestinian victims.

From 10-15 July, the Boycott HP campaign is observing its Global Week of Action. Groups from all over the world are holding actions and sending messages to the HP companies calling on them to fulfil their ethical and legal obligations. Unite the Union’s recent endorsement of the campaign further strengthens this demand.

In April 2018, Dublin City Council became the first European capital to endorse BDS and to promise to end its contracts with HP companies and DXC Technology, an HP spin-off.

Boycott HP is one campaign in the growing, Palestinian-led, global Boycott, Divestment and Sanctions (BDS) movement, which was inspired by the global movement against apartheid in South Africa.