After original bill stalled in 2019, Rubio & Coons introduce new bill expected to give Israel at least $38 billion over the next 10 years – over $7,000 per minute 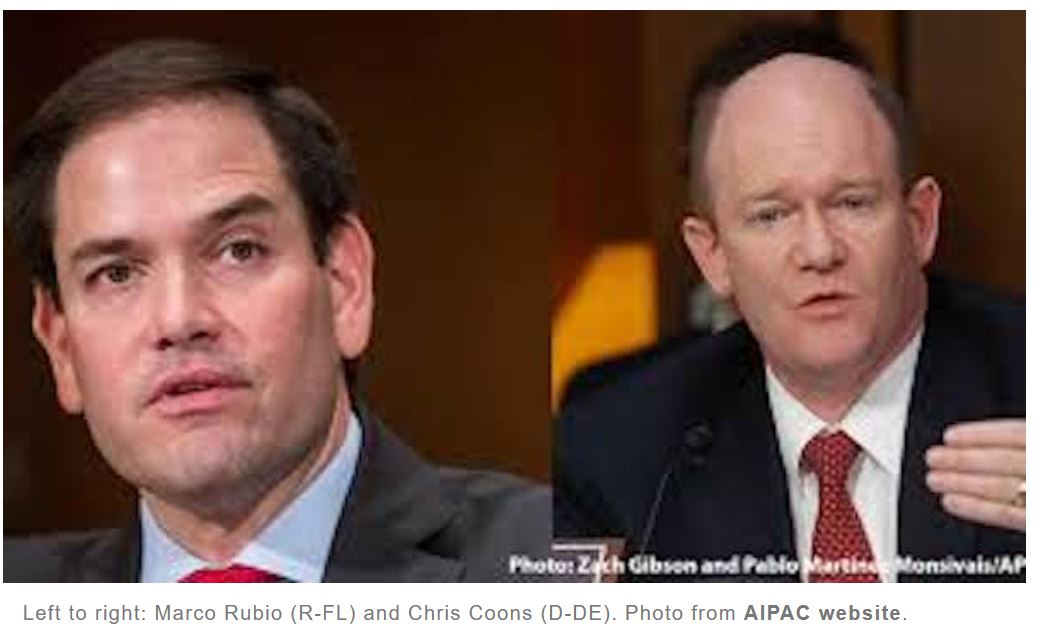 News analysis by Alison Weir – Republican Marco Rubio and Democrat Chris Coons have introduced legislation expected to give Israel a minimum of $38 billion over the next 10 years. (The text for the bill, S.3176, is not yet available on the Congressional website.)

The new bill has been introduced because a similar one introduced last year, S.1, had stalled. The new version reportedly omits a section that would have let state governments punish Americans for boycotting Israel, which had caused some Senators to oppose it on First Amendment grounds.

The new bill is expected to contain the same financial provisions as the previous one: solidifying into federal law a 2016 Memorandum of Understand (MOU) with Israel procured by the Obama administration, which had been a non-binding agreement, while changing the $38 billion in the MOU from a floor to a ceiling.

Given the influence of the Israel lobby, that change would likely lead to an increased amount of US tax money going to Israel in coming years, possibly even in 2020.

The bill text said it was “the largest single pledge of assistance ever.” The money works out to $7,230 per minute to Israel, and equals about $23,000 per each Jewish Israeli family of four.

The aid is broken into two parts: $33 billion in direct military aid and $5 billion in certain weapons programs.

The previous bill also required NASA to cooperate with Israel’s space agency, despite accusations of Israeli espionage, and some additional perks. It is unknown if those provisions are also in this year’s legislation.

An earlier version of the legislation had received widespread support, including co-sponsorship by Elizabeth Warren, despite the fact that it appears to violate several US laws.

In a press release, the Senators linked their new bill to an alleged need to help Israel protect itself during heightened tensions following the US assassination of the top Iranian general, which had been urged by Israeli officials. Israel has long targeted Iran as an adversary to be weakened.

Rubio and Coons often serve as foot soldiers for AIPAC, the American Israel Public Affairs Committee. They were featured at the 2018 AIPAC national conference (video here).

Rubio’s career has been funded from the beginning by multi-billionaire Israel partisans such as Normal Braman, Paul Singer, Sheldon Adelson, and Larry Ellison. Rubio has close ties to the pro-Israel neocons who pushed the U.S. into the disastrous Iraq war.

Coons is a stalwart Israel supporter, including working with Lindsey Graham in one of the Israel lobby’s latest entities: Pro-Israel America.