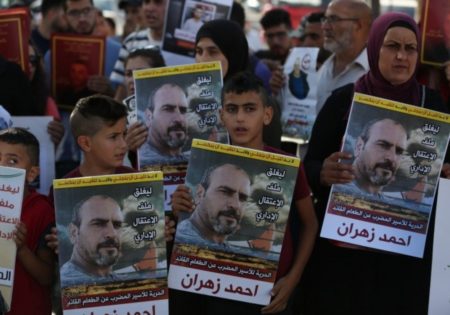 A Palestinian detainee in Israeli jails, Ahmad Zahran, has been on hunger strike for 112 days in a row, protesting his administrative detention without charge or trial, amid very critical health conditions.

An Israeli occupation court dismissed, on Tuesday, an appeal submitted by Zahran, where it asked him to end his strike before having his appeal met, citing the need to subject him to interrogation under his current health status.

Detainee Zahran suffers deteriorated health conditions, including a drop in his heartbeats, pains throughout his entire body, salt deficiency, and loss of over 30kg of his weight, said the Commission of Detainees’ Affairs.

The committee indicated that Israeli occupation authorities have detained Zahran since March of 2019, without any charge and put him under administrative detention, adding that he was not subjected for interrogation since then.

Al Ray further notes that Zahran, 42, a resident of Deir Abu Mash’al village to the northwest of Ramallah, has spent about 15 years in Israeli occupation jails.

Zahran began his open-ended hunger strike after Israeli authorities did not fulfill a promise to end his administrative detention in the last strike, which went on for 38 days and ended in July 2019.

According to Palestinian figures, about 5,700 Palestinians, including 48 women and 250 children, are currently languishing in Israeli detention jails.

Among them, close to 500 Palestinians are currently being held under Israel’s illegal policy of administrative detention, under which prisoners can be held for renewable six-month periods without charge or trial.