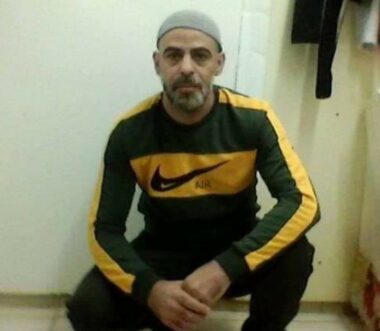 RAMALLAH, Monday, August 23, 2021 (WAFA) – Salem Zeidat, the Palestinian administrative detainee in Israel who has been on hunger strike for 43 days, has suspended teh strike  following an agreement that would set him free at the end of his current detention period, the Palestinian Prisoner Society (PPS) has confirmed.

It said that Zeidat, 40, from Bani Naim town in the south of the occupied West Bank, has been held by Israel under the arbitrary Administrative Detention since February 22, 2020, following his arrest for entering Israel without a permit.

He was first sentenced to four months in prison and after completing his term, he was held in administrative detention without charge or trial.

Zeidat, married and a father of five children, had spent two years in Israeli prisons for resisting the occupation. He will be released in November.

He was the longest on hunger strike among nine Palestinian administrative detainees who reverted to take this path in order to secure an end to their detention and their ultimate freedom.

Two of the remaining eight prisoners have been on hunger strike for more than 40 days demanding their release.