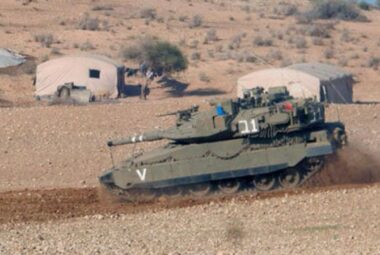 For the second day, Israeli soldiers continued Monday, the live-fire military drills in Khirbit Ibziq Bedouin village, in the Northern Plains of the occupied West Bank.

Abdul-Majid Khdeirat, the head of Khirbit Ibziq Village Council, said the Israeli army forced eight families out of their dwellings to conduct the training.

He added that the army initially ordered three families to leave their dwellings before initiating the military drills, but forced eight families out on the second day.

Khdeirat stated that the Palestinians are forced to remain out of their community, and had to take their livestock out of the area, and were officially informed that they cannot return until the end of this month.

The army informed the Palestinians that the military drills will be carried out on sporadic days during this period.

It is worth mentioning that the army carries out many military drills each year in and around the Bedouin communities, using live fire, including explosives, tanks, and artillery.

This month alone, the army destroyed and seized 17 structures in the Bedouin community, displacing 27 people, including 19 children.