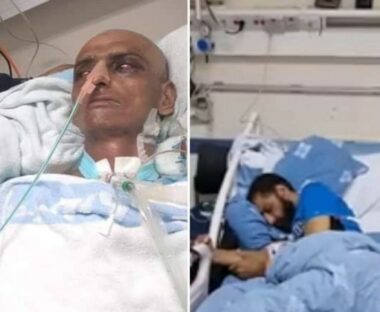 The Palestinian Prisoners’ Society (PPS) has reported that a former political prisoner who was diagnosed with cancer and was released in February of this year after he spent 19 years of his 20-year prison term, remains in a critical condition at the Hadassah Israeli hospital.

The PPS stated that Hussein Masalma, from Bethlehem, was diagnosed with an advanced stage of Leukemia and remained deprived of the essential specialized medical attention while in prison, is in a serious health condition, after suffering further complications.

It added that the doctors in Hadassah have doubled his chemotherapy doses several days ago, however, his condition is worsening as his body does not seem to be responding to therapy.

It is worth mentioning that, last year, Maslama started suffering serious complications accompanied by sharp and debilitating pain when he was held at the Negev Detention Camp but was not provided with medical treatment for two months before he was moved to a hospital and received the official diagnosis.

Masalma was abducted by the Israeli army in the year 2002, and was sentenced to 20 years in prison.

The PPS held Israel responsible for Masalma’s life, and the lives of all detainees who suffer from serious illnesses, including cancer and liver diseases, but are denied the urgently needed specialized medical treatment.

It added that many Palestinian detainees, especially those who have been in prison for at least twenty years, are facing serious health conditions after being diagnosed with various stages of cancer.