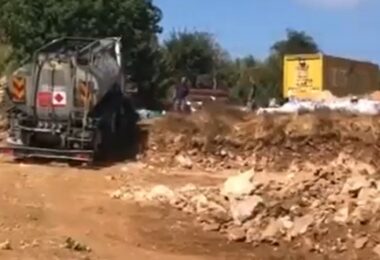 He added that the colonizers also bulldozed surrounding lands to prepare for a new street, and conducted infrastructure work, including hooking the illegal outpost with electricity.

Salman also stated that the colonizers invaded the lands a few days ago, and bulldozed several sections in preparation for installing the illegal outpost.

It is worth mentioning that the invaded lands where the illegal outpost was installed are close to the illegal Yakir and Havat Yair colonies, which were built on stolen Palestinian lands.

In related news, Israeli soldiers abducted, on Monday at dawn, four Palestinians, and assaulted the father of one of them, causing various wounds, in Salfit, Tulkarem, Qalqilia, and Ramallah, in the occupied West Bank.

In related news, the soldiers abducted, early on Tuesday morning, two young Palestinian men and detained a child, in Hebron, in the southern part of the occupied West Bank.

On Sunday evening, Israeli soldiers invaded the village of al-‘Arqa, west of the northern West Bank city of Jenin, before storming and ransacking many shops, leading to protests.