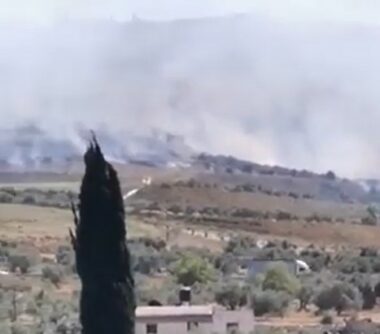 Dozens of illegal Israeli colonizers invaded, on Monday at dawn, a Palestinian orchard in Burin town, south of the northern West Bank city of Nablus, and burnt dozens of olive trees.

They added that the invaded orchard is owned by Akram Omran, and is located in the southern area of the village.

After burning the trees, the colonizers ran to their illegal colony, while the Palestinians rushed to the orchard to extinguish the fire.

On Sunday at night, dozens of colonizers invaded the al-Mas’odiyya archeological area, norther of Nablus.

Mohammad Azem, the mayor of Sebtastia town, said the colonizers invaded the area, where the ruins of ancient buildings stand, on the opposite side of the archeological site in the town.

He added that the colonizers announced their intentions to invade the area several days ago, and were accompanied by many Israeli soldiers.