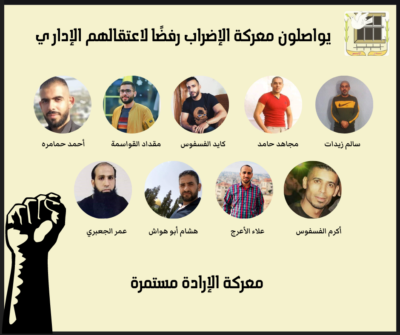 The Palestinian Prisoners’ Society (PPS) has reported that nine political prisoners, held by Israel under the arbitrary Administrative Detention orders without charges or trial, are ongoing with the hunger strike.

The PPS said the Israeli Prison Authority has been preventing the detainees from visiting with their families and even their lawyers, in addition to forcing them in solitary confinement under difficult conditions to force them to end their strikes.

It added that the soldiers repeatedly attack the detainees, and constantly move them between various prisons, to exert more pressure on them.

The PPS stated that one of the detainees, identified as Salem Zeidat, was the first to start the strike 42 days ago, while Mojahed Hamed began the strike 40 days ago.

The PPS held Israel responsible for the lives of the detainees, especially since they are facing serious complications, but are determined to continue the strike demanding their freedom, or at least to face charges.

It is worth mentioning that most of the hunger-striking detainees have held several hunger strikes this year, and most of them are also former political prisoners who spent years in Israeli prisons, and many of them went on strikes in previous years.

Israel is holding captive 4750 Palestinians, including 550 who are held under the arbitrary Administrative Detention orders. Among the imprisoned Palestinians are 200 children and 42 women.

The Detainees who holding hunger strikes are: