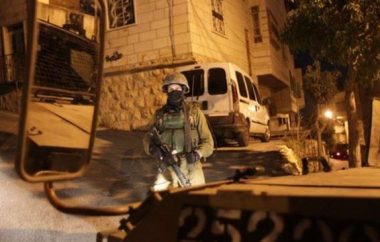 Israeli soldiers withdrew, on Wednesday morning, from the Qalandia refugee camp, north of occupied East Jerusalem, after abducting four young Palestinian men, following many hours of invasions and violent searches of dozens of homes, leading to clashes with local youths.

Many local youths hurled stones and empty bottles on the invading military vehicles, while the Israeli army also claimed that some Palestinian fighters exchanged fire with the soldiers.

The army fired dozens of live rounds, flares, gas bombs and concussion grenades after invading many alleys and homes in the refugee camp; no injuries were reported.

Furthermore, the soldiers closed the main road in front of the refugee camp, searched dozens of cars and refused to allow the Palestinian s through until the army concluded the invasions into Qalandia and Kufur Aqab.

The invasions into the homes, included homes belonging to families of Palestinians who were killed by the army in various previous incidents.

On Wednesday at dawn, the soldiers abducted four Palestinians in the West Bank governorates of Hebron and Tubas, after invading their homes and searching them, and confiscated solar panels, in the West Bank’s northern plains.