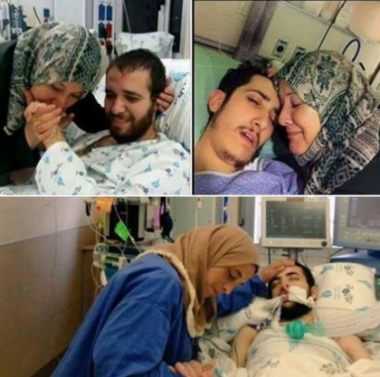 The head of the Palestinian Detainees Committee Issa Qaraqe has reported that an agreement was reached for the release of hunger striking detainees Mohammad Balboul, Mahmoud Balboul and Malek al-Qadi, after Israel agreed not to renew their illegal Administrative Detention.

Qaraqe’ stated that due to the determination of the striking detainees, and their continued steadfastness despite the life-threatening health conditions, the detainees remained determined to end their illegal detention.

He added that the agreement states that:

The official stated that “Palestinian President Mahmoud Abbas, and various political leaders held extensive talks with many officials in order to reach a solution to the issue of the three striking detainees, in order to ensure their safety.”

He added that the president, many officials and human rights groups, held talks on the regional and international levels, especially with human rights and legal groups, in order to reach an agreement that ensures the release of the striking detainees.

Qaraqe’ also thanked all human rights defenders, and organizations, around the world for their support and massive solidarity in this struggle against injustice and illegal policies, and for their endless support of the detainees and their legitimate demands of justice and freedom.

The official added that at 4 P.M today, there will be a massive march and celebration at the Manger Square of the Nativity Church in Bethlehem, and called for further and more effective international support to ensure the release of all political prisoners held by Israel, and to end the ongoing escalating Israeli violations on International Law and the basics principles of Human Rights.

The detainees reached near-death conditions, going in and out of coma, and faced very serious health deterioration, yet remained determined to continue their hunger strike in protest of their illegal Administrative Detention, without any charges or trial.