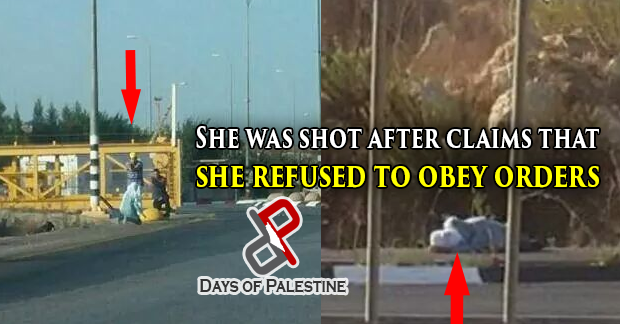 A Palestinian child was shot and wounded by the Israeli military Wednesday morning when she allegedly failed to heed a soldier’s order to ‘stop’ as she approached a military roadblock.

Israeli troops then locked down the roadblock and transported the wounded child to the Meir Hospital in Kfar Sava.

The child was shot at a roadblock near the illegal Israeli settlement of Alfei Menashe, near Qalqilia in the northern part of the West Bank.

She is the niece of a 24-year old Palestinian woman who was killed in November at a military roadblock in the same area. In that incident, 24-year old Rasha Ahmad Hamed ‘Oweissi approached the roadblock from afar, holding a knife in her hand and a suicide letter in her bag. She was shot by a soldier while she was still at least 30 feet away from the roadblock.

Following Wednesday’s shooting of the young girl, the Israeli military claimed that the girl “told them during interrogation” that she had “come there to die” – but Israeli military initial reports on incidents are usually discredited soon after they are made.

The child had no weapon anywhere on her body or in any of her belongings.

The Israeli Prime Minister told his cabinet earlier this week that all soldiers should be ordered to be on ‘heightened alert’ in preparation for upcoming Jewish holidays.

According to the Israeli daily Ha’aretz, Israeli Prime Minister Binyamin Netanyahu stated, “The security forces are on heightened alert and I will meet with them today in order to ensure that we will be ready to defend our people during this sensitive period”.