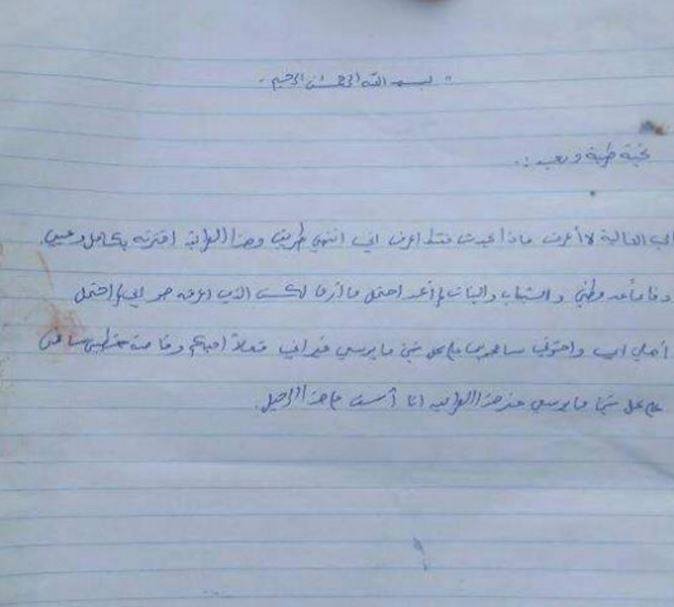 A 24-year old woman was killed by Israeli troops Monday morning at a military checkpoint in the West Bank when she approached the checkpoint from afar, holding a knife in her hand and a suicide letter in her bag. She was shot by a soldier while she was still at least 30 feet away from the checkpoint.The woman was identified as Rasha Ahmad Hamed ‘Oweissi. The checkpoint where she was killed is the checkpoint, near the walled-in city of Qalqilia, in the northwestern part of the West Bank. The city is almost completely surrounded by the Israeli Wall, with a checkpoint controlled by Israeli forces allowing or denying entry to the city’s residents.

Her suicide letter read as follows, ‘Thanks be to God, Best wishes and greetings. My dear mother, I don’t know what is happening. I just know that I’ve reached the end of the road. And this is the road that I chose with full consciousness. In defense of my homeland, the young men and women, I cannot bear what I see anymore. But what I know is that I can’t take it anymore. My family, my dad, my brothers, forgive me for everything. I just know that I really love you, especially my fiance. Forgive me for everything, I have nothing else but this path. I am sorry for this departure.’

Rasha did not attempt to attack anyone, and was apparently suffering from a mental health crisis. Eyewitnesses report that she did not pose a threat at anytime. She was simply standing, holding a knife, waiting for the soldiers to shoot her.

A number of the recent incidents of ‘knife attacks’ by Palestinians against Israelis have been revealed to have been staged by Israeli forces after the fact. It is unknown if any of the other incidents were attempts to commit ‘suicide by cop’ as it is known in the US – in which a mentally unstable person puts themself in a position to be shot by police, rather than committing suicide themselves.

She is the 80th person to be killed by Israeli forces since October 1st. 8 Israelis have been killed by Palestinians between October 1st and October 18th.

No Israelis have been killed since October 18th, but the Israeli military’s daily invasions of Palestinian communities and shooting of protesters with live ammunition have continued unabated.