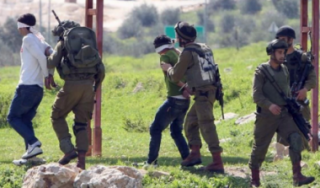 The Palestinian Prisoners Society (PPS) has reported that Israeli soldiers kidnapped, on Wednesday at dawn, twenty-one Palestinians, during extensive invasions and searches of homes in different parts of the occupied West Bank.

The Nablus office of the PSS, in the northern part of the West Bank, said the soldiers searched many homes in the district, and kidnapped Abdullah Harb Omran, from Burin village, southwest of Nablus.

In Salfit district, in central West Bank, the soldiers searched homes and kidnapped one Palestinian, identified as Ammar Nayef, from Kar ed-Deek village.

In Bethlehem, the soldiers searched a number of homes and kidnapped one Palestinian, identified as Rabea’ Wael Issa, and Mohammad Mousa az-Zeer.

Also in Bethlehem, undercover Israeli soldiers, infiltrated into the ‘Aida refugee camp, north of the city, before storming the homes of Wasfi Ahmad al-‘Amour, and Mohammad Nasrallah before kidnapping two of his sons, identified as Firas, 24, and Fadi, 26.

In Hebron, in the southern part of the West Bank, hundreds of Israeli soldiers invaded the city, in addition to Beit Ummar, Doura and the al-Arroub refugee camp, searched dozens of homes and kidnapped eight Palestinians.

In addition, dozens of soldiers invaded Bil’in village, in the central West Bank district of Ramallah, broke into and searched several homes and confiscated hard discs from a number of laptops.