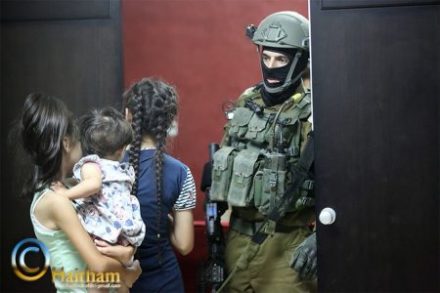 Dozens of Israeli soldiers invaded, approximately at 2:30 after midnight, the village of Bil’in in the central West Bank district of Ramallah, broke into and searched several homes and confiscated hard discs from a number of laptops.

Most of the invaded homes belong to nonviolent activists, senior members of the Popular Committee against the Wall in Bil’in, including Dr. Rateb Abu Rahma, his brother Abdullah Abu Rahma, in addition to Ahmad Abu Rahma, Mohammad al-Khatib, Ashraf Abu Rahma and photojournalist Haitham Khatib.

Nonviolent activist Ashraf Abu Rahma told the IMEMC that the soldiers invaded his home and confiscated his laptop, his wife’s laptop, two mobile phones and flash cards used by his wife for her digital camera.

He added that the soldiers invaded the homes of Rateb Abu Rahma, the coordinator of the Popular Committee in Bil’in, and confiscated the hard disc of his son’s computer, in addition to confiscating two mobile phones from the home of Basel Mansour.

Ashraf further stated that the soldiers invaded the home Abdullah Abu Rahma, and inspected the contents of his children’s laptop, in addition to violently searching his property.

“The soldiers just said they will be the property back, but no one believes this,” he said, “They took my car before and never returned it; they are just lying.”

Coordinator of the Popular Committee in Bil’in, Dr. Rateb Abu Rahma, denounced the latest military invasion, and the searches of homes, in addition to the illegal confiscation of private property. Abu Rahma added that the escalating Israeli violations will not be able to stop the nonviolent, popular resistance, in the village.

The protests in Bil’in started approximately twelve years ago, and kept going despite the ongoing excessive use of force and escalating violations, including night raids, home invasions and curfews, and despite the death of several nonviolent activists on the hands of the Israeli military.

The villages managed to regain 1200 Dunams of orchards, out of 2300 Dunams illegally confiscated and isolated by Israel for the construction of the Wall and the illegal colonies.