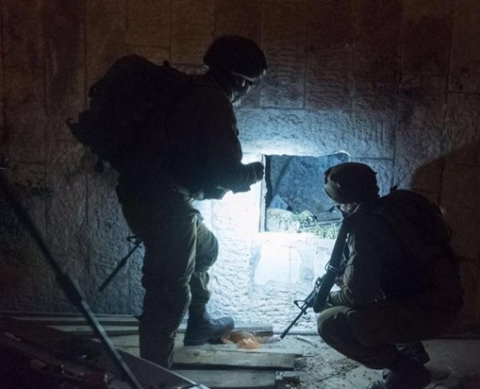 Hundreds of Israeli soldiers invaded, on Wednesday at dawn, Hebron city, in the southern part of the occupied West Bank, Beit Ummar, Doura and the al-Arroub refugee camp, searched dozens of homes and kidnapped six Palestinians.

The soldiers said they located and confiscated a homemade weapon, some magazines and combat tools in addition to several knives in Jabal Johar, before kidnapped Abdul-Rahma Abdul-Qader Sabah.

In Beit Ummar town, north of Hebron, the soldiers kidnapped three Palestinians during an extensive search campaign targeting many homes and property in the al-Bayyada and ‘Aseeda areas, in addition to the neighborhoods of Bahar and ath-Thaher.

The kidnapped have been identified as Mohammad Ahmad Ekhlayyel, 27, Mohammad Issa Bahar, 17, and Mohannad Zoheir Al-Allami, 18; all are former political prisoners.

The soldiers also summoned Fadi Mohammad Ja’ar, 16, for interrogation in the Etzion military base and security center.

In addition, the soldiers invaded the al-Arroub refugee camp, and kidnapped Mohammad Yousef Jawabra, while Ali Mohammad Amro was kidnapped from his home in Doura town, south of Hebron.