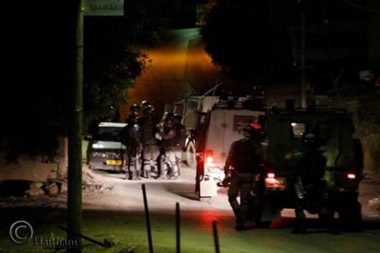 Dozens of Israeli soldiers invaded, approximately at 1:20 after midnight, the village of Bil’in in the central West Bank district of Ramallah, after surrounding it from various directions, and illegally confiscated three Palestinian cars, including a car of a local journalist, with expensive equipment in it.”

Cameraman Haitham Khatib, a senior nonviolent activist in Bil’in, said one of the three cars, donated by charitable international solidarity organization, is owned by him, and is equipped with Go Pro and WIFI.

Khatib added that the soldiers, who know him very well through his activities and constant reporting from the village, have deliberately targeted his car and the photojournalism equipment it contains.

He also said that, while the soldiers have recently decreased the use of weapons against the weekly nonviolent protests in Bil’in, they have escalated their invasions into the village, largely during late-night hours, and at dawn.

“They are attacking our village, stealing our cars and possessions, and are harassing us,” Khatib added, “The soldiers are increasing their night raids and invasions into our homes — how can we live like this; we will never give up, please help.”