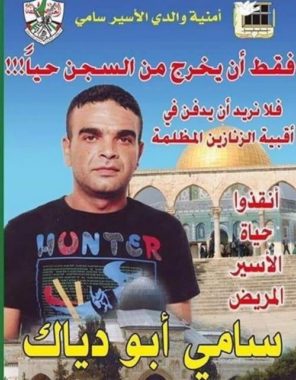 The Palestinian Prisoners’ Society (PPS) issued a statement warning of the grave deterioration of the health condition of a Palestinian detainee, held by Israel, especially after a recent serious health setback.

It added that the detainee underwent a surgery in his bowels in the year 2015, after the prison authority moved him to Soroka Medical Center, but due to a misdiagnosis and a medical error he faced serious complications, and some of his intestines were removed.

Before he recovered, he was moved to various prisons, and was repeatedly moved to medical centers in prison vehicles, not fit for transferring patients, which caused another deterioration, and poisoning of the skin, before he also developed renal failure and kidney failure, in addition to cancer.

Qaddoura Fares, the head of the Palestinian Prisoners’ Society (PPS) held Israel responsible for the live of the detainee, especially since he was constantly denied professional medical attention.

Fares added that the PPS, and various Palestinian Human Rights groups, have filed various appeals with Israeli courts, asking for his release to receive treatment in Palestinian hospitals, and hospitals abroad, but the appeals were all denied despite the seriousness of Abu Diak’s condition.

He stated that Israel uses the dire conditions of the detainees, and their serious health conditions, to punish them and inflict further suffering, in violation of International Law.

It is worth mentioning that Abu Diak was abducted by the army in 2002, and was sentenced to three life terms, and additional thirty years in prison.

His brother, Samer Abu Diak, is also a political prisoner serving a life term, and is facing various health complications, in the Ramla prison clinic.