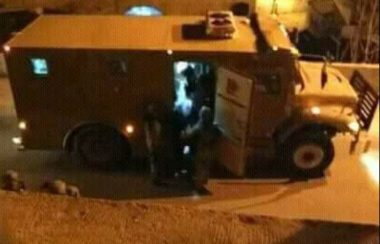 Israeli soldiers abducted, on Wednesday at dawn, four young Palestinian men, including three who were taken prisoner from their homes in several parts of Bethlehem governorate, in the occupied West Bank.

They added that the soldiers invaded and searched homes in Beit Fajjar town, south of Bethlehem, and abducted Majdi Mahdi Taqatqa and Nassar Majed Taqatqa.

The soldiers also invaded the Saff Street, in the center of Bethlehem city, searched homes and abducted Mustafa Ali al-Mo’ti.

On Tuesday evening, the soldiers abducted the secretary of Fateh Movement in Beit Rima town, northwest of Ramallah, after stopping him at the entrance of the nearby Nabi Saleh village.