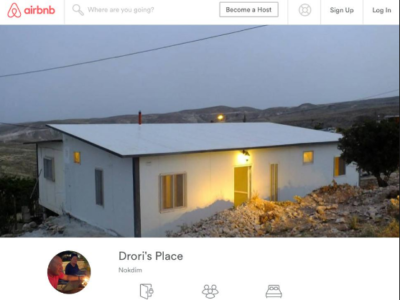 On Monday, the international crowdsourced bed and breakfast company AirBnB announced that they will no longer allow listings that are located in Israeli settlements on occupied Palestinian land.

The decision comes after a two year campaign of Human Rights Watch and other organizations, who pointed out that the promotion of listings in the Israeli-occupied West Bank is a violation of the Fourth Geneva Convention and of international law.

According to a statement on the AirBnB website, “We concluded that we should remove listings in Israeli settlements in the occupied West Bank that are at the core of the dispute between Israelis and Palestinians.”

Israeli military forces began occupying the Palestinian Territories of Jerusalem, the West Bank, Gaza and the Syrian territory known as the Golan Heights in 1967.

Over the past 51 years, Israel has, in direct violation of the Fourth Geneva Convention, transferred more than 500,000 civilians into housing developments on stolen Palestinian land – most of which was initially seized by the military for ‘security purposes’, then transferred to civilians for colonial settlement takeovers.

In response to the announcement by AirBnB, the Israeli Tourism Minister Yariv Levin said that the Israeli government will restrict AirBnB’s operations in Israel as a whole. Levin claimed without evidence that AirBnB was ‘singling out’ Israel, and that the decision was based in ‘anti-Semitism’.

The Israeli Minister of Strategic Affairs Gilad Erdan said that he would be contacting U.S. officials to try to charge the company in U.S. courts for an alleged violation of the Israeli anti-boycott laws recently passed in 25 US states following lobbying by Israeli-government funded lobbying groups.

AirBnB, in their statement, made clear that Israel is not being singled out, and that this decision is based on its newly released international standards on not allowing listings on lands where people have been displaced.