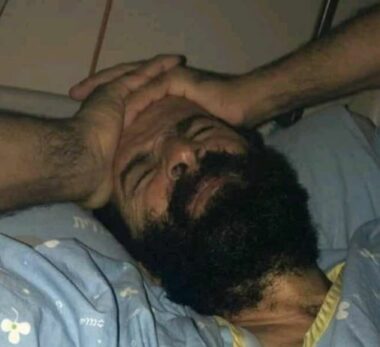 The long-term hunger striker Maher al-Akhras, on the 90th day of his water-only hunger strike, was finally allowed to receive a visit from his wife and daughter on Sunday. It was a tearful reunion, as his young daughter embraced her father’s frail, bony body. al-Akhras is nearing death, according to medical personnel from the International Committee of the Red Cross who have been monitoring his medical condition.

This is the first visit he has been allowed from his family since he was taken into custody on July 27th by Israeli authorities. He has also been denied access to legal counsel and has never been told what his charges are.

Former political prisoner, researcher and the head of the Studies and Documentation Committee of the Palestinian Commission of Detainees and Ex-Detainees, Abdul-Nasser Ferwana, told the IMEMC that the army wanted to move al-Akhras to the Ramla Prison Clinic after the soldiers invaded his room, but they eventually did not transfer him, and he is still in Kaplan Medical Center.

In a verbal message carried by a lawyer of the Palestinian Prisoners’ Society (PPS), detainee Maher al-Akhras, who began his hung strike three months ago, said he doesn’t want to die at an Israeli clinic, but at home surrounded by his loving family.

Al-Akhras told the PPS lawyer, Ahlam Haddad, that while he is still being imprisoned, he wishes to see his mother, wife, and children, and added that he does not want to die at an Israeli clinic.

“If anybody is willing to help me, then try to secure my transfer to a Palestinian hospital in the West Bank,” he said, “If I am going to die, I want to be surrounded by my family.”

“Please do not place my corpse in the morgue, do not perform an autopsy, whether I die here or in the West Bank,” he stated, “If I die, all I ask is for former political prisoners, those who experienced the pain of the hunger strike, to carry my corpse during my funeral, and my message to my people is to always protect and defend our homeland.”

His statements were made before Israel moved al-Akhras, on Friday, from Kaplan Hospital to the infamous Ramla prison clinic, despite his rapidly deteriorating health.

On Saturday, his family announced that Maher’s mother, wife, and three eldest sons will start a hunger strike after the Israelis denied them their right to visit Maher Al Akhras when he was in his room at Kaplan hospital.

The soldiers, stationed at the door of his room, refused to allow his family to visit with him, and ignored the cries and pleas of his little daughter. The family was literally standing at the door leading to his room.

The father of six was abducted by the soldiers from his home in Jenin, in northern West Bank, and has since been held under the arbitrary Administrative Detention orders, without charges or trial.

He began the open-ended hunger strike in July demanding to be released and declared that his strike would continue until freedom or death.

It is worth mentioning that al-Akhras has been abducted and imprisoned by Israel numerous times, including when he was taken prisoner on July 27th, 2020, and was instantly slapped with a four-month Administrative Detention order, without charges or trial.

Before his current imprisonment, al-Akhras was spent for over four years in prisons, including many months under the arbitrary Administrative Detention orders.