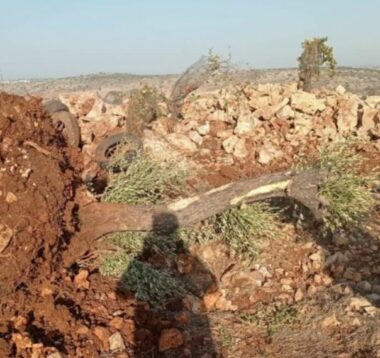 Israeli soldiers uprooted, on Monday morning, dozens of Palestinian olive trees in orchards northwest of Salfit city, in central West Bank, and confiscated some of them.

The Mayor of Salfit, Abdul-Karim Zobeidi, stated that the army bulldozers uprooted more than sixty olive trees, owned by Ziad Zahed, and added that the trees are 3-100 years old.

Zobeidi also stated that the soldiers demolished and destroyed several retaining walls around his 3-Dunam orchard.

He added that the army also handed an order to halt the construction of a nearby 13-Dunam stadium funded by Salfit City Council under the allegation that it is in areas B and C of the occupied West Bank.

Salfit Governor, Lieutenant Abdullah Kamil, denounced the escalating Israeli violations, including an attack by Israeli soldiers who hurled three concussion grenades at the center for the Palestinian Preventative Security department, north of Salfit.

Besides uprooting the olive trees, the soldiers also uprooted many almond and fig trees, in addition to grapevines.

Kamil stated that Israel has recently escalated its violations against the Palestinians and their lands in the governorate, as part of the ongoing attempts to confiscate more Palestinian lands to build and expand the illegal colonies, built in direct violation of International Law and the Fourth Geneva Convention.

The so-called “Oslo Peace Accords” signed between Israel and the Palestine Liberation Organization (PLO), in 1993 and 1995, led to dividing the West Bank into three areas: A, B, and C.

Area A (%18) of the West Bank, is “controlled” by the Palestinian Authority (P. A), while Area B is controlled by Israel but the P.A controls health, education, economy, and internal security, an issue that means the army continues to invade them to conduct arrests or any other measures under the pretext of security.

Area C (about %60 of the West Bank) remains under full Israeli control, and it is where Israel keeps building and expanding its illegal colonies, demolishing Palestinian homes, confiscating lands, and various other violations.

One of the main areas Israel continues to target, including its plans to fully annex in the Jordan Valley and the northern Dead Sea region of the West Bank in Area C, where more than 65.000 Palestinians reside, in addition to at least 11.000 Israeli colonists.

The Jordan Valley is the most fertile territory in the occupied West Bank, which made it a target for Israeli colonialist projects, especially Israeli companies that exploit the Palestinian lands and resources.