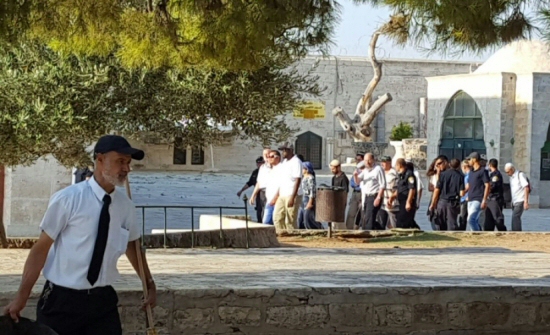 The settlers, led by archaeological and historical guides, toured the Al- Aqsa  compound and took some photos for different places, Jerusalemite sources said.

According to Al Ray Palestinian Media Agency, Israeli authorities seek, by such intrusions, to devote the temporal and spatial division of Al- Aqsa mosque compound and Judaize Jerusalem.

However, settler attacks on Christian holy sites have been progressive and on the increase, in recent years.

This past Thursday, Israeli police continued their aggression against the mosque and the staff of the Rehabilitation Committee. Six of the staff, including the director of the committee,  were taken into.

For the second day in a row, the Israeli police prevented the committee staff from completing the renovation works inside the Dome of the Rock, at the mosque compound.

Media expert in the affairs of Jerusalem and Al-Aqsa mosque, Mahmud Abu Atta, said that “Israeli police had arrested both of the director of the committee, Bassam al Hallaq and other five employees including: Mohammad al-Dabbagh, Suleiman Abdullatif, Moatasem Karama, Anass al-Dabbagh and Mahmud Annata.”

Israeli occupation forces broke into the Dome of the Rock in the morning and  halted the reconstruction works, while detaining six of the rehabilitation staff and taking them to Al Selsela Gate police station, Abu Atta added.

Abu Atta said “The aggression of the Israeli occupation against the Islamic Waqf officials including the Rehabilitation Committee and Al-Aqsa mosque guards is completely unprecedented and dangerous.”

On today’s intrusion, he confirmed that 21 Israeli settlers had broken into the mosque yards and taken a provocative tour around it. They  also  performed Talmudic religious rituals at Al- Rahma gate,  east of Al- Aqsa, according to Abu Atta.

He added that troops also deployed special forces  inside the courtyards .

Israeli police deported Isa Salhab, an observer of the Rehabilitation Committee in the Islamic Waqf, from al-Aqsa for two weeks.

On Wednesday, Israeli police released, with no conditions, the director of the Rehabilitation Committee Bassam al Hallaq and others, after interrogating them for several hours at Al- Qishleh Police Centre, in the Old City district of Jerusalem.

Since the early hours of the morning, Muslims worshipers from Jerusalem and pre-1948 Palestine came into al-Aqsa Mosque yards  where they spread out in educational circles, reading verses from the Quran  and  defending the mosque from settlers break-ins with Takbeer.

The aggression of the Israeli occupation against Al-Aqsa  guards, as well as staff from the Islamic Waqf, has escalated dramatically, whereupon Israeli forces detained and deported nine guards and employees.