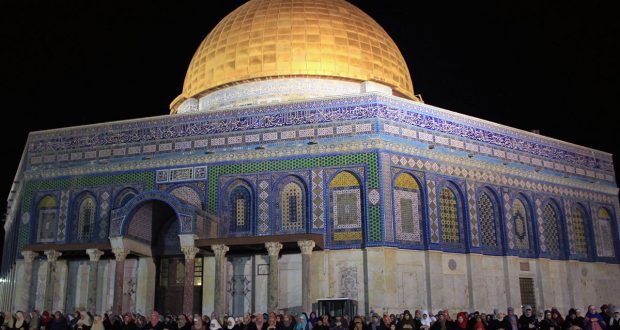 Monday the 6th of June marked the beginning of the Ramadan; the holiest holiday in Islam. The Ramadan is a sacred month in the Islamic calendar, where Muslims celebrate when the Qu’ran was revealed for the first time to the Prophet Muhammad.

For Muslims all over the world who celebrate the Ramadan, it’s a month of prayers and celebrations, with the intention to improve morality and character as well as strengthening ones relationship with Allah.

However, for Palestinians living in the occupied West Bank under illegal Israeli military occupation, the Ramadan is also a month filled with uncertainties and harassment.

Since the beginning of the Ramadan, more than 330 Palestinians have been detained throughout the West Bank; at least 60 of these were children, the youngest being 10-year old Marwan Sharabati from Al-Khalil (Hebron).

Discrimination and aggression in East Jerusalem

Israeli discrimination and aggression has especially been intense in and around occupied East Jerusalem, where thousands of Palestinians from in and outside East Jerusalem go to visit and pray at the Al-Aqsa compound and mosque, the third most religious site in all of Islam.

The Al-Aqsa compound in East Jerusalem was annexed in 1967 as a part of Israel’s illegal occupation of the West Bank – this annexation was never recognised by the international community.

On Sunday 26 of June, Israeli soldiers broke in and raided the Al-Aqsa Mosque, harassing and disturbing peaceful Palestinians during prayer. Israeli forces also escorted a group of approximately 200 settlers into the mosque, shouting and harassing Palestinians praying. This action was in contravention of a long running tradition that only Muslims would enter the mosque during the final 10 days of Ramadan.

As a result of the clashes, Israeli authorities enforced the understanding to restrict access to Muslim worshippers although also placed punitive restrictions on Palestinians; refusing access to all males under 45 years old, breaching their right to exercise freedom of religion.

On Friday 30 June, Israeli soldiers shut down the Qalandiya checkpoint, preventing thousands of Palestinians, including males younger than 45 years old, to pass in order to reach the Al-Aqsa Mosque. The Israeli forces then proceeded to attack Palestinians at Qalandiya checkpoint with live ammunition, rubber coated steel bullets and teargas, wounding 40 Palestinians as well as killing a 63 year old Palestinian man due to massive teargas inhalation.

Collective punishment and settlement expansion during the Ramadan

After an attack at a market in Tel Aviv, where four Israeli citizens where killed, Israel has conducted a large collective punishment strategy, suspending entry permits for more than 83,000 Palestinians from the West Bank. The 83,000 people impacted had nothing to do with the crime committed, and thereby preventing them from going to Al-Aqsa in the annexed East Jerusalem is another clear example of Israel enforcing illegal collective punishment.

Following a Palestinian attack on a 13-year old American-Israeli settler, Netanyahu has also approved construction of 42 new housing units in the settlement of Kiryat Arba near Hebron. The settlements are illegal according to international law, and the UN and EU leaders have denounced the expansion, urging Netanyahu to reverse the decision.

Netanyahu’s actions continue to escalate the situation in the West Bank and completely disregard the recently released Quartet report, which has resulted in the U.N. chief Ban Ki-moon condemning Israel for this continued expansion of illegal settlements.