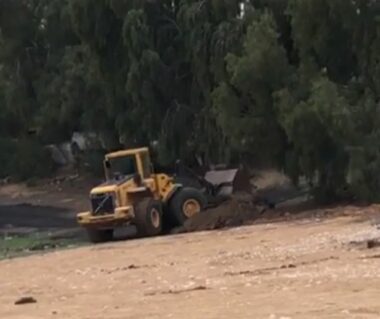 Israeli soldiers demolished, Thursday, the Bedouin Palestinian village of al-Arakib, in the occupied Negev, for the 181st time in recent years and the tenth this year alone.

The Palestinians in the village always rebuild their shacks, barns, and tents every time Israel demolishes their small village, despite the massive destruction and losses, in addition to the fines and fees.

Eyewitnesses said a large police force and personnel of the so-called Negev Development Authority, invaded the village and started demolishing and removing tents, sheds and barns, in addition to uprooting their crops.

They added that the soldiers also destroyed a dirt road that leads to the local graveyard, to prevent the Palestinians from using it.

Prior to Thursday’s destruction of the village, it was last demolished on November 19th, 2020, but the villages remain determined to stay on their lands.

Al-Arakib is one of 51 villages that predate Israel and remain unrecognized due to the Israeli plans to remove the indigenous people to replace them with settlements, shopping centers and for military purposes.

It is located to the north of Be’er as-Sabe’ (Beersheba) in the Negev desert, in the southern part of historic Palestine.

Al-Arakib was first established during the Ottoman era, and has been subject to constant Israeli violations since the year 1951. It was first completely demolished, and its residents displaced on July 27th, 2010.

There are more than 240.000 Palestinians living in various villages and communities in the Negev, some of these dwellings were established hundreds of years ago.

However, Israel does not recognize these villages, although they predate it, and refuses to provide them with basic services and infrastructure, such as running water, electricity, infrastructure, and even clinics.

Al-Arakib village in the Negev is one of the most impacted “unrecognized villages” in the Negev.