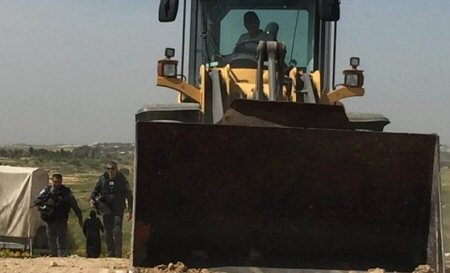 Israeli bulldozers demolished the unrecognized Bedouin village of al-Araqib, in the Negev desert of southern Israel, for the 143rd time, on Wednesday.

The continuing demolitions of al-Araqib are carried out in the attempt to force the Bedouin population to relocate, to government-zoned townships.

Like the 34 other Bedouin villages “unrecognized” by Israel, al-Araqib does not receive any services from the Israeli government and is constantly subjected to threats of expulsion and home demolition.
These “unrecognized” villages were established in the Negev soon after the 1948 Arab-Israeli war, following the creation of the state of Israel, when an estimated 750,000 Palestinians were forcibly expelled from their homes and made refugees.