Al-Haq Report – DEPRIVED A VOICE: An Investigation into Shrinking Space in Area C 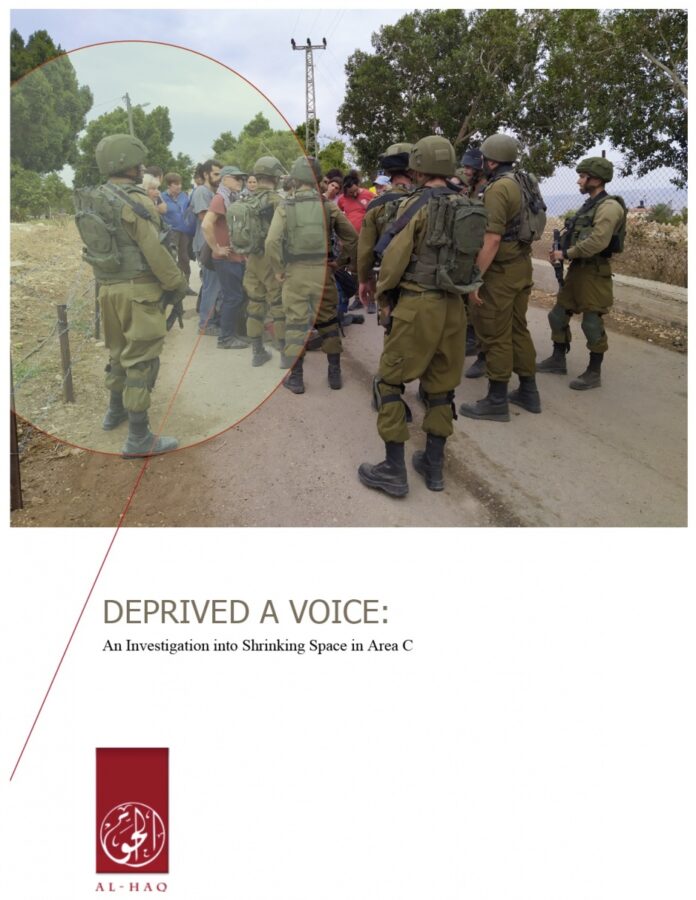 Today, 14 December 2020, Al-Haq launches a new report “DEPRIVED A VOICE: An Investigation into Shrinking Space in Area C” which examines the daily harassment of human rights defenders by the Israeli Occupying Force (IOF) and Israeli settlers illegally transferred in to colonize the West Bank, in the area classified under the Oslo Accords as Area C. In doing so, the report examines how human rights defenders, including human rights field workers, journalists, medical personnel and volunteers, are targeted and silenced in Area C, in an attempt by Israel to shrink Palestinian space for critical human rights work.

Globally, there has been a sharp increase in the attempts by governments to systematically stifle dissenting voices, a phenomenon recognized as ‘shrinking space’. In 2017, Amnesty International described the current age as one “of fear, division and demonization”, observing that “governments in many countries are adopting laws and policies which make the work of human rights defenders riskier and more difficult. From laws that authorize force against peaceful protesters or allow for mass surveillance, to banning access to foreign funding or imposing stringent requirements to register organizations, the space to stand up for human rights is increasingly tight.”

In recent years, much has been written about shrinking space for civil society organizations and for human rights defenders in Israel and the Occupied Palestinian Territory (OPT). Such concerns have been acknowledged by the UN’s High Commissioner for Human Rights, Michelle Bachelet, who when addressing the Human Rights Council in September 2019 noted: “my Office remains concerned that the targeting of human rights defenders – including with travel bans, delegitimising statements and reports, interrogation, detention and ill-treatment – by Israel, the Palestinian Authority and the de facto authorities in Gaza – has increased, resulting in further shrinking of civil society space.”

This report is intended to give the reader an insight into how shrinking space manifests itself in Area C of the West Bank. Palestinians in Area C are constantly at risk, both from the formal occupation authorities, and from Israeli settlers that target Palestinians in an attempt to drive them from their land. The report is not intended to be exhaustive in any way. The descriptive nature of the report lets the reader walk alongside the Human Rights Defenders of Area C. We have selected some of the most recent cases prior to the Covid-19 lockdown. They are by no means the most extreme cases we have witnessed. Rather, they represent an illustration of the daily obstacles that are faced in Area C for even the most basic human rights work.