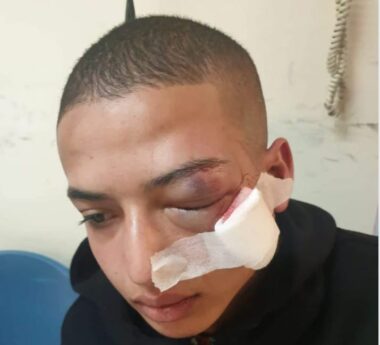 Israeli soldiers abducted, on Monday evening, a Palestinian teenage boy who was shot below his eye, on December 6th, in the al-‘Isawiya town, in occupied East Jerusalem. The soldiers also abducted an elderly woman in Hebron.

Media sources said the soldiers abducted Omar Ahmad Khalil Mahmoud, 17, from his home in al-‘Isawiya, after the army invaded it.

It is worth mentioning that, on December 6th, Mahmoud was shot with a rubber-coated steel bullet below his left eye, after the soldiers invaded the town and attack protesters. He was walking back home after praying in the al-Aqsa Mosque.

During the invasion of the town, and the subsequent abduction of the Palestinian teen, the soldiers attacked protesters, especially in Obeid neighborhood, and fired gas bombs and concussion grenades at them.

In addition, the soldiers invaded Masafer Yatta village, south of the southern West Bank city of Hebron, and abducted an elderly Palestinian woman.

Fuad al-‘Amour, the coordinator of the Protection and Steadfastness Committee in Masafer Yatta and southern Hebron Hills, said the soldiers abducted Wadha Khalil Najjar, the sister of Bakr Najjar, who is a political prisoner serving several life terms in Israeli prisons.

In related news, the soldiers invaded Um al-Qaba area, in the Jordan Valley of occupied Palestine, before confiscating the car of Mahdi Daraghma, the head of al-Maleh Village Council, and a tractor owned by the council, while plowing Palestinian farmlands in the area.

On Monday at dawn, the soldiers invaded many Palestinian communities across the occupied West Bank, before violently searching them, causing damage, and abducted six Palestinians, including the father of a child who was killed by the army in March of 2019.