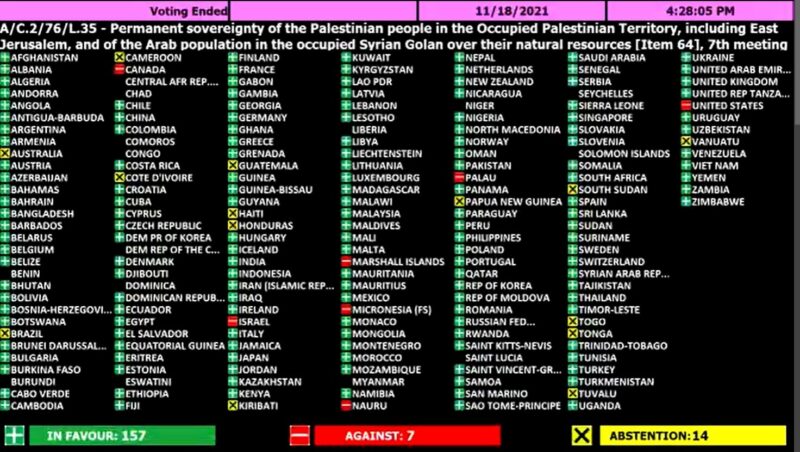 Ramallah – WAFA:  Palestinian Minister of Foreign Affairs and Expatriates Riyad al-Malki praised today the overwhelming vote by the United Nations General Assembly in favor of two draft resolutions that affirm the right of the Palestinian people to self-determination and to sovereignty over their land.

In a press statement, al-Malki welcomed a vote at the Third Committee of the United Nations General Assembly in which an overwhelming majority of the world countries voiced support for a draft resolution on the right of the Palestinian people to self-determination. The draft resolution was passed on Thursday evening by 163 votes in favor, 5 against and 10 abstentions.

The Foreign Minister expressed his thanks to the countries that voted in favor of the resolution, calling on the world to unite in finding practical mechanisms to implement the right of the Palestinian people to self-determination, including offering support for President Mahmoud Abbas’s initiative to hold an international peace conference.

He stressed that the overwhelming vote in favor of the resolution was a natural response from the international community to the Israeli occupation’s violations, as well as a response to the US Secretary of State Mike Pompeo’s visit to the colonial Israeli settlements.

In this regard, al-Maliki called on the member states of the United Nations to shoulder their responsibilities to protect the inalienable rights of the Palestinian people, and to take practical measures in the face of the Israeli occupation and the “rogue” states that encourage the Israeli violations and crimes, such as the current US administration.

He stressed that Palestinian diplomacy will foil all attempts to undermine the rights of our people to independence and the establishment of the independent State of Palestine with Jerusalem as its capital, and the return of the refugees to their homes.

Al-Malki also praised the UN General Assembly’s Second Committee for overwhelmingly approving a draft resolution that called on nations to ensure that they do not treat settlements in the occupied West Bank and East Jerusalem as a part of Israel.