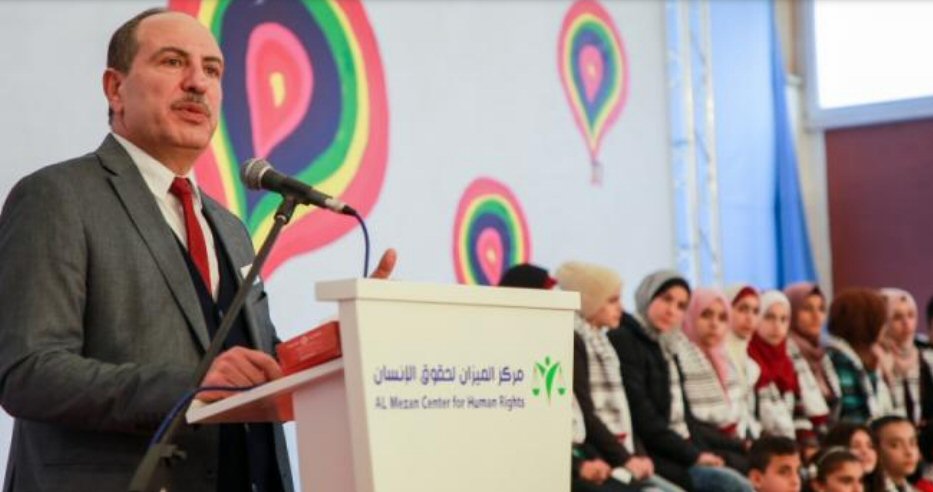 On Thursday, 20 December 2018, Al Mezan Center for Human Rights, in cooperation with the Ministry of Education (MoE), and United Nations Relief and Works Agency (UNRWA), organized a ceremony to honor the winners of the child human rights and international humanitarian law annual art award for 2018. Paintings by children of all stages from all over the Gaza Strip from UNRWA and government schools competed for the award. The ceremony was held at 11am at Al-Deira Hotel in Gaza City.

Mrs. Shirin Al Shobaki, Al Mezan’s Training and Mass Communication Unit coordinator, opened the ceremony by welcoming attendees and extending thanks to the supporters of the art award as well as the participants who competed for the award.

Mrs. Al Shobaki provided a brief about the award, which was held for the tenth consecutive year, and thanked those who had contributed for their efforts.  She noted that more than 4,000 paintings were made by schoolchildren on human rights related themes, including the right of children to protection from violence and conflict. She added that the number of winners this year was 36, three from each of the 12 school grades. The prizes handed out to the winners comprised a collection of scientific encyclopedias, short stories and honors certificates in addition to small cash awards for each winner—$200 for winners and $150 for first and $100 for second runners-up.

Mr. Issam Younis, Al Mezan’s general director, welcomed the audience and thanked the MoE and UNRWA for their continuous cooperation. He then discussed the importance of this celebration as platform for children to express themselves artistically. Mr. Younis said the participating children conveyed through their artwork the tragic reality of their life, as they witnessed three wars in less than six years and live under continuous Israeli violations adding to the closure and blockade of the Gaza Strip. He added that some of the children paintings reflected hope and love of life despite the sorrow they may be living after a demolition of a house or a death of a kin.

Mr. Younis noted that the celebration coincides with several ongoing challenges to human rights, from the political division among Palestinians to the threats of shutting down UNRWA. In a recorded message, His Excellency Minister of Education, Dr. Sabri Saidam, thanked Al Mezan for carrying out the art award as it contributes in promoting the concepts of human rights and international humanitarian law among students. Dr. Saidam expressed his pleasure at the high level of participation in the award competition, adding that paintings symbolize the just reality Palestinian children aspire to live in. He concluded by thanking schools and human rights organizations for working together to inspire the young generation of Palestinians.

Dr. Fadel Saloul, UNRWA education program director, thanked Al Mezan for organizing the award and celebration and congratulated participants on their contributions. He discussed the positive message signaled in the celebration as students, male and female, from public, private, and UNRWA schools sat on one stage, and he called for more collaboration between MoE, UNRWA, and private schools. “These paintings by students communicate the fundamental rights to which all people are entitled,” Dr. Saloul said. “Despite its financial instability, UNRWA remains committed to promoting human rights.” He finally extended his thanks to school teachers and commended such opportunities as the art award that expand children’s participation and engagement.

The ceremony included various cultural shows, from popular art to music, performed by Raouf Al-Belbesi Band and Al-Anqaa’ Band. The ceremony was closed with the opening of Mawtini exhibition, featuring the best 71 paintings out of the 4,000 contributed through the competition. 1,000 posters of paintings, by students Fatima Al-Shawwaf and Nisma Abu Sultan, were distributed to the attendees.