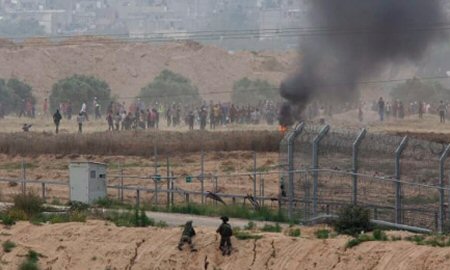 The Israeli occupation army has raised alert status along Gaza’s border, and enacted additional security measures for fear of any revenge attack from Gaza, Hebrew media sources reported, according to Al Ray.

Walla Israeli info site reported that the security measures came about lest Palestinian resistance factions carry out an attack against Israelis, in revenge of killing four Palestinians, last Friday, along Gaza border.

The site pointed out that it was decided to take these measures in wake of the return of tension and escalation, after a period of relative calm in the security fence area.

According to the site, the tension along the Gaza border fence has  declined in recent weeks, after the Egyptian-brokered cease-fire between Israel and Hamas. The launching of balloons, firing of explosive devices and grenades were stopped, and there were almost no organized attempts to damage the security fence.

After few weeks of relative calm, skirmishes between Palestinians and Israeli forces returned, in which the demonstrations returned to the level of the days leading up to the cease-fire.

Israeli security sources warned, on Sunday, of both Hamas and Islamic Jihad movements of re-firing rockets towards Israeli settlements.

0404 Israeli site quoted sources as saying that, in case of re-firing rockets towards Israel, the reaction will be very different and difficult.

It added that, no matter what happened this time, the response will not be a tragedy, but a severe blow to Hamas.

The joint operations room of the resistance factions in the Gaza Strip announced, Saturday, that it is on permanent consultation after the death of 4 citizens and wounding dozens last Friday; during their participation in the march of return and breaking the siege.

Since March 30, Palestinians have been taking part in marches near the security fence between the Gaza Strip and the occupied Palestinian territories of 1948, to demand the return of the refugees to their abandoned towns and villages, and to break the siege on Gaza.