Al-Qadi Released, Moved To The Istishari Hospital In Ramallah 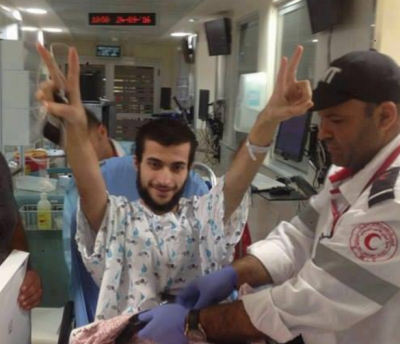 Former Palestinian political prisoner Malek Qadi, who held a hunger strike for 70 days, protesting his illegal Administrative Detention by Israel without charges or trial until achieving his freedom, was discharged from Israeli hospital and is currently at the Istishari Hospital, in the central West Bank city of Ramallah.

Fathi Abumoghli, the senior advisor of the Istishari Arab Hospital board of directors, said the hospital prepared an entire team of specialized physicians, including neurologists, endocrinologists, cardiologists and internists, who will be examining al-Qadi and supervising his treatment.

Dr. Imad Tayyim, who is in charge of Qadi’s treatment, said the freed detainee will undergo all needed tests so that he can recover well, and avoid further complications.

Al-Qadi’s mother said she was unable to describe her happiness and relief for the release of her son, and wished freedom to all Palestinian detainees held by Israel.

She added that her son won his freedom through a tough and painful battle of hunger strike, but remained steadfast and determined.

She also thanked every person in Palestine, and around the world, who stood for human rights, and in solidarity with her son.