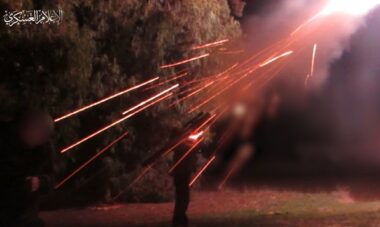 On Sunday evening, the Al-Qassam Brigades, the armed wing of Hamas, said it intercepted Israeli war jets bombing areas in the southern parts of the Gaza Strip.

Al-Qassam said it fired surface-to-air missiles at the Israeli fighter jets firing missiles into one of its training camps and farmlands in Khan Younis and Rafah.

Al-Qassam said the Israeli strike did not lead to casualties and added that, besides the surface-to-air missiles, the fighter fired several shells.

The Israeli army claimed its Airforce fired missiles at what it called “a rocket production site and a trunnel” in southern Gaza and added that Hamas fighters fired anti-aircraft at the Israeli fighter jets.

The army stated that it attacked Gaza in response to a shell allegedly fired from the coastal region into an area in the southern part of the country.

On Thursday, Israeli soldiers abducted a Palestinian near the perimeter fence in the northern part of the Gaza Strip.